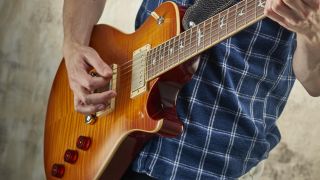 Whether you want to play lead or rhythm, you need to get your picking technique together. We show you how...

“Picking the strings, then. Up or down - that’s got to be it, surely?”

Essentially, yes. Assuming you’re using a pick (aka plectrum), picking pretty much boils down to choosing whether to down-pick or up-pick, and there are a few ‘rules’ that will help you work out the best approach for any given piece of music.

Get your picking sorted and you’ll soon find it easier to get a feel for strummed rhythms and ‘single-note’-style lead lines.

“I find myself sticking to downstrokes most of the time, but I know it’s not always the right approach…”

It’s a good starting point though, and you can learn a lot about rhythm through downstrokes. Start by choosing a chord you know, then play it four times using downstrokes. Count out loud to four and strum in time with your count.

“Count to four and strum in time? That feels a little bit basic…”

Yep, that’s the idea! Lots of music follows a four count. If you can feel where the basic downbeats are, you’re halfway to understanding rhythms.

If you’re finding this easy, try strumming an upstroke in between every downstroke. Count ‘1 & 2 & 3 & 4 &’ - you’ll be playing downwards on the numbers and upwards on the ‘&’s. It’s the most common kind of strumming and we’ve tabbed an example for you below.

“You mentioned lead guitar. Seems to me that solos would be too complicated for this down-up method. What’s the deal there?”

Solos are generally more rhythmically complex than strummed chords, but you can often play simpler lead lines down-up style. This is known as ‘alternate picking’, ie, alternating between down- and up-picking.

The idea is to play a steady down-up motion and keep the movement going, even if there is no note. That way your downstrokes always land on the downbeat. Have a go at our second tab example.

“It’s harder than strumming! It’s quite hard to make sure you only hit one string.”

How you hold your pick has a big effect on accuracy. Use the very tip of your pick for solos; use more of the pick for strumming.

Use the right picking technique for the right kind of music.

Let plenty of the pick show. This gives you a good ‘raking’ feel as you strum the strings. Try a thin pick.

Hold the pick close to the tip for the most accuracy. Soloing is often easier with a less flexible pick.

The challenge here is working out which notes are downbeats and which are upbeats. Remember to keep your down-up motion going continuously.