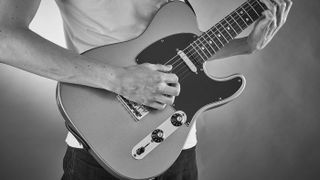 Early funk is often associated with the Godfather Of Soul James Brown, who helped pioneer this style of dance music in the late 60s and early 70s. The ubiquitous use of syncopation (playing on the off beats) together with sparse arrangements across several instruments came to define the sound.

How to play funk wah guitar

Jimmy Nolen is Brown’s most recognised guitarist, popularising the dominant 9th chord and intricate single-note ideas played in the ‘pocket’ between bass and drums.

Later on, players such as Paul Jackson Jr (who played for Michael Jackson) and Nile Rodgers (Chic, Sister Sledge) honed the style, usually dialling in a bright, clean guitar tone to cut through the band as part of the rhythm section. Moving into the 90s, players such as John Frusciante forged a rockier vibe with the Red Hot Chili Peppers.

Read this lesson and try out a handful of musical ideas for a flavour of the funk guitar sound and to develop your rhythm playing, timing, pick-hand control as well as some cool chord embellishments.

These classic Sex Machine Jimmy Nolen-style chords are defined by short, choppy picking and the oft-used 9th to 13th chord change. When jamming your own ideas make sure to use short chord stabs with pauses (aka rests) in between - there’s more funk in this approach than with a constant stream of unbroken strumming.

In the 90s, John Frusciante added rock attitude to the Red Hot Chili Peppers’ brand of funk, introducing bluesy bends and a more aggressive way of picking. The quarter-tone bends in bar 1 are applied only to the second string so make sure to keep the first string steady. Keep a fluent down-up picking motion going throughout.

Nile Rodgers is a master of chord embellishment as shown in our Chic-inspired line. We’ve used sus4s, 6ths and hammer-ons in a Dm-G progression - all easily added to the basic shapes. Playing the muted strings (marked X) is a vital part of the sound and helps you deliver a funkier groove; simply release finger pressure at these moments.

LA session ace Paul Jackson Jr helped define the poppy, percussive single-note lines on some of Michael Jackson’s hits - we’re using 16th-note picking. Try to angle your downstrokes slightly into the body of the guitar (rather than picking flat across the string) for a more attacking ‘spank’ sound. It’s tiring for the pick hand, so build it slowly.

Once you’ve tried the tab exercises and had a go at adapting with some of your own ideas, you’ll develop a better feel for rhythm and timing, which chord shapes to use and how many strings to play - so why not experiment by trying one or two of these different methods in your next jam?

It could be as simple as adding a few fret-hand mutes to a standard chord progression to make it sound more funky and percussive, or trying an improvised single-note line instead of playing chords.