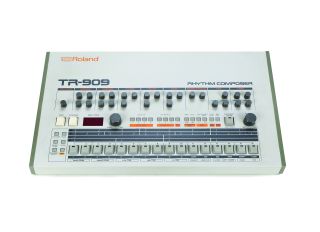 It's one of the most iconic drum machines of all time, but how does it actually work? Allow us to take you on a tour of the Roland TR-909's controls and features.

Even as long ago as 1983, tabletop gear was plagued by the ever-present Shift button. Then, as now, it was necessary to access a secondary level of functions below select dual-purpose buttons. You can tell which ones they are by the field of orange that surrounds some of the legending across the panel – Track and Pattern Write functions are among them.

Unlike many drum machines that came before it, the TR-909 at least gave some indication of global BPM via the Display Window to its left, assuming that the various external sync functions weren’t being used. That three-digit LED display was also used to indicate the current measure, among a few other helpful indicators.

These buttons likely need no explanation to even the greenest electronic music producer. However, do keep in mind that, at the time, such things were not as standardised as they are today. It was old machines like the 909 that would bring us to expect not only a Start key, but also a Stop button that doubled as a Continue function.

So much of the action takes place using this row of 16 keys across the bottom. Acting not only as a means by which to enter notes and perform various editing functions, they also serve as a visual representation of the 16 steps in the sequence.

Here’s another operation that has become all too familiar thanks to modern beatboxes seeking to honour the legends of yore. Used to select an instrument for, say, step writing a pattern, the Instrument Select button is held down while tapping a Main Key assigned to the desired instrument.

Even at the time of the TR-909’s release, drum machines were considered robotic and lifeless (which didn’t stop the Musician’s Union from attempting to have them outlawed), but today, instruments like the TR-909 are revered for their ‘groove’, aka shuffle. This is where the ‘push’ and ‘pull’ of a pattern is defined – the offset of even-numbered 16th notes, natch. Flam, meanwhile, is another way a drum programmer can introduce humanity and life into a beat. On the TR-909, it could only be applied to bass, snare, or tom tracks.

One of the defining features of the big TR boxes, Sound Section Controls are real-time parameters used to shape each drum sound’s pitch, timbre and/or dynamics.

Each drum sound gets a Level control. Decay can be adjusted for bass, toms, hats, and cymbals. Bass, toms, and cymbals all have Tune, while the snare is outfitted with a Tone control, as well as the now-famous Snappy knob.

The finger drummers of 1983 dished out their ditties not on velocity-sensitive rubber pads like we do today, but on the same sort of clunky, clicky keys that one imagined were used to enter the launch codes on a nuclear command console. Nevertheless, the real-time Tap Write method was a favourite among the digitally dextrous: when on, simply bash those clicky keys to enter note data per part.

Roland were especially proud of the improvements made to the TR-909’s Accent functions. The 909 offered two different Accent types. Accent A (Total Accent) was set per step: all voices that appeared on that step would be accented. Accent B allowed an accent to be applied to any voice on any step. Both could be used together, depending on the value of the Total Accent knob.

It’s worth mentioning that, upon power up, the default mode of the machine is Track Play. It’s more likely that you’ll want to start with a Pattern, so you’ll probably need to use that Shift button to access the Pattern Write (edit) mode, select one of the Pattern Play buttons, then tap one of the 16 chunky buttons along the bottom to select a Pattern. Easy when you know how!