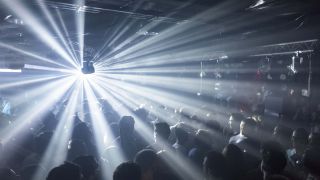 If you want your builds and drops to have maximum uplifting, dancefloor-igniting effect, you need to consider the pure science of sound as well as the practical, ‘engineering’ side of production.

Work through these nine techniques and you'll be well equipped to take advantage of your listener's cerebral foibles and unconscious auditory tendencies. The upshot? Perceptibly bigger, badder drops with real emotional weight.

Learn more about the art of the drop in the May edition of Computer Music.

It’s no great secret that we perceive louder sounds as ‘better’, and this is especially effective on the dancefloor, where high-volume bass frequencies become a physical experience.

To give your drop a palpable step up in amplitude, use volume automation through the breakdown and build-up, so that they start out nice and loud but are few dB lower by the time the drop transition comes up. You can do this per-track for ultimate control, or simply automate the master bus volume. Do it right and the listener won’t even notice it’s happening!

Bass frequencies can have profound effects on us humans. For starters, science has found that we respond more to the timing of low frequencies than that of higher ones, which explains why the low-end typically carries the groove that drives us to dance.

Research also indicates that the sacculus - a tiny organ in the inner ear linked with brain regions associated with the pleasure response - reacts to low-frequency vibrations above 90dB. Loud bass is physically felt throughout the body, which most of us would agree is an enjoyable sensation.

With all of this in mind, plan your breakdown so it begins at its bassiest, progressing towards the minimum amount of bass right before the drop, to make the drop seem extra-heavy. This can be done using shelving EQ to make the bass quieter, or a high-pass filter to remove it more aggressively. While you can make this obvious and audible, it works great when done subtly, too, by rolling off the lowest octave (a cutoff of around 60-100Hz will achieve this).

Distortion and limiting can convey a sense of systems overloading and speakers about to blow. Try driving your master bus harder and harder through a saturator or compressor during a build-up to make it sound like the speakers are straining to contain the sheer force of it all.

If you use volume automation to bring the output level down, the build can sound like it’s getting louder and more intense when it’s really quieter overall! You can use this technique in reverse to give your drop an overblown, explosive beginning!

Relative volume levels between parts are one of the most important aural indicators of mix hierarchy. You can exploit this psychoacoustic phenomenon by pushing an important sound’s level up the first time it appears in your drop, then pulling it back to its usual level so it sits neatly back into the mix.

To bring out a lead sound, you may find it works better to raise the sound’s level by, say, 1dB while dropping others by 2dB (using automation or sidechaining), rather than simply raising the lead sound by a full 3dB. This will make it sound like it’s dominating the mix, which a human brain will interpret as it pushing all the other elements aside. However you approach it, it’s a great way to make a statement with your lead hook.

Did you know that your ears have an involuntary muscular reflex that reacts to loud sounds? It’s designed to protect our hearing, but it takes a little while to kick in - around 40 to 100ms. Movie sound effects exploit this with explosions that feature a loud initial burst followed by a muffled boom - by mimicking our response to big-decibel noises, we perceive the sound to be more overwhelming, intense and powerful than it really is.

You can leverage this to add impact to your music, too, and the most well-known effect is overt sidechain compression pumping in response to a kick drum - now you know why it makes mixes seem so loud! You can use it for a one-off effect, too: try volume automation at the start of the drop, quickly pulling down the level of selected mix elements in response to explosive, ear-grabbing FX-like crashes or impacts, allowing them to fade back to full level as the FX tail off.

Our experience of music is heavily influenced by all the other music we’ve heard before. Great music plays on this, balancing satisfyingly familiar elements - clichés, in other words - with irresistible twists on tried-and-tested tropes.

It’s the latter that can set your tracks apart, so first study the genres you work in and master the standard palette of compositional and transitional tricks… then turn them on their heads!

How about a snare roll build-up that, instead of ever-quickening, starts out super-fast and halves in speed with each bar? Or a build-up of seven bars instead of eight?

Creating vivid contrast between your build-up and drop will make the latter more impactful, enhancing the sense of release. Luckily for the modern producer, there are many ways to achieve this.

We've already talked about creating a volume ‘step’ between your build and drop. You can also restrict the frequency content in your build-up to make the drop seem bigger, deeper and brighter - or do it the other way around, crafting a frequency-filling build to emphasise a lo-fi, understated drop section.

Stereo contrast can be achieved by progressively narrowing the mix as the break/build progresses, jumping back into full stereo for the drop. Perhaps a less obvious tool is dynamic contrast - try a dynamic break/build with pokey transients slamming into an ultra-squashed drop, or vice versa.

It's common practise to roll the bass off for breakdowns and build-ups. But with less bass applied in these parts, how can we give the impression that key elements like kick drums haven’t become too thin and weedy?

One solution is to add reverb, which gives a natural impression of size and depth. This can make a bass-light kick sound huge, booming and epic when it’s actually pretty restrained in terms of frequency content. Once the drop kicks in, though, your listeners will be reminded of how real bass sounds – and feels!

9. A connection is made

Never underestimate the emotional impact that’s intrinsic to using certain sounds in an arrangement. Adding even just one of these can add some real magic to a transition, elevating your drop from a mere example of music production to something that belongs in the real world, connecting with the audience on a deeper, more psychological level.

There’s no hard-and-fast recipe here, but if you’re stuck, the human voice is always a good bet - be it in the form of speech, singing, or an effected cut-up sample. Other ‘real’ sounds can work, too, although it doesn’t have to be real. A synthesised but entirely unique sound can also work - you’re after anything with character and recognisability. You’ll know it when you hear it!