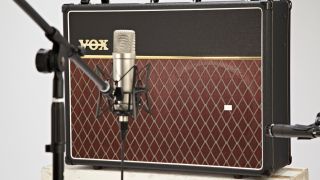 Best of 2019: Sound better, play better, track better - check out these simple tips for your next session...

You don’t have to use different guitars for rhythms, overdubs or leads, but consider how your tones can be panned and separated in the mix. That could mean a different pickup position, amp model or overdrive pedal. Even veteran players have to consider it when they find themselves as the only guitar player in the studio - as Slash did with his World On Fire album with Myles Kennedy & The Conspirators...

“I really wanted to go in and do a proper recording where you have harmonies and rhythms maintained throughout and the guitars go on the top,” Slash tells us. “Like pretty much every record I’ve done, up to Apocalyptic Love.

2. Use delay for girth

Dialling in a short slapback echo can give your leads more thickness and also inspire you. Iron Maiden’s Dave Murray always uses it in his monitor mix when recording for that reason.

“It’s nice to have a bit of delay,” he tells us, “because in the studio it can be really dry and you want to feel you are in a live situation where you have that hall echo that you can play off.”

Rock and metal producer Romesh Dodangoda is a firm fan on delay for his recordings:

“With lead guitars, delay units can be your friend in getting things to sit on the edge of the speakers,” he says. “Try a 1/4 on the left and 1/8 on the right, for a starting point. The different delay times on the left and right will create the illusion that the guitar is wider.

"I use this quite a lot for interesting rhythm effects in stereo. Putting the delay in the effects loop or after the mic will give you a cleaner sounding delay, which may sound wider than using a delay straight into the input of the amp. The sound of the delay will be different depending on where you put it in the chain so experiment and see where it sounds bigger to you.”

There are different ways to play the same notes on the guitar and you can use that to your advantage when recording. If you have a chord progression, try it in two different ways (eg open chords and bar chords). You can then pan the two approaches to add width to the guitar.

This is all something to consider before you even think about your guitar tones, because specific voicings will just sound better for certain parts. Sit down with an acoustic and test them out.

Positioning your mic close to the speaker is the easiest and most convenient way of recording your guitar. A dynamic mic will handle the high SPL of your cab, so you can place it as close as you can physically get it. Start in the centre of the speaker cone, and move it towards the edge of the speaker.

The brightest tone is found dead- centre of the speaker - right on the dust cap. As you move the microphone to the edge of the speaker, you’ll find the sound gets progressively darker.

The Effect Of Distance

Distance will also play a key role in your resulting tone - placing the mic very close to the speaker will capture the amp’s sound in detail, with a lot of attack and definition. With this type of setup you’re recording the sound of the speaker, with hardly any room sound. The further you move the microphone away from the speaker, the more you’ll capture the room reflections, adding ambience and depth to your sound.

For some styles of music - or just personal taste - you may prefer to capture the sound of your amp in a more natural, ambient way. Ambient mic’ing will capture more of the sound reflections in the room, as well as the amp, and can really help your guitar to sit in the mix well later. Because you’ll be placing the mic further from the source, we’d recommend using a condenser mic; the extra sensitivity and frequency response will keep your sound full, even at a longer distance.

Start with your microphone about a foot (30cm) away from the grille. As with close mic’ing, the tonality of your captured sound will change, depending on which part of the speaker you aim the mic at - however bear in mind that this effect will be lessened the further you get from the speaker.

The rule here is simple: move it further from the amp to record a more distant, roomier sound, and closer to the amp to capture less ambience.

“I personally have the best luck - or at least I think so - when I back the mic off a little bit. I know a lot of engineers throw it right on the grille to get the bass boost, the proximity effect and all that garbage, but I find that if I back it up about six inches, I get a more balanced EQ curve.”

Nobody likes to enter a recording situation completely unprepared, but there’s also a lot to be said about what you can create ‘in the moment’ when you’re playing. Europe’s John Norum tells us how he blends both elements in the studio...

“I usually like to work out something ahead of time with a nice melody. I can usually get some ideas from the vocal and the melody with that - and maybe incorporate some of it into the solo. But if it’s uptempo I usually just go for it and see how it comes out. Hopefully I can get it on the first or second take. I don’t usually do more than five; I’ll stop because you can lose that intensity and it starts going downhill. That’s what I’ve noticed with myself. After five if I can’t find anything that’s good I’ll just erase it and start all over again. It’s about 50/50 with improvisation - that spontaneity makes it fun and I want to surprise myself too. I don’t like to have everything planned ahead of time, it gets kind of boring.”