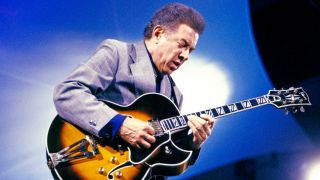 Kenny Burrell was born in 1931 in Detroit, Michigan, into a very musical family. Like many others of his generation, he originally wanted to play the saxophone, but there weren’t any to be found in the local music shops because all the available brass had been used up by the military to make weapons for the war. So, luckily for us, his second choice, the guitar, became the instrument he ended up playing.

Stylistically, Kenny embraced the blues, classical guitar and bebop jazz pretty much in equal measure and quickly developed a very distinctive and individual musical style. In terms of his direct guitar influences, Muddy Waters, Charlie Christian, Django Reinhardt, T-Bone Walker and Charlie Parker were all mentioned over the years.

He made his debut recording playing with jazz trumpet player Dizzy Gillespie at the age of 20 and his first big-record-label solo album at 25. During his long career, he has played on several hundreds of albums as a session musician and on over 100 as a bandleader.

Kenny is also a renowned music educator and, since 1978, has been heavily involved as a distinguished professor of global jazz studies at UCLA in Los Angeles.

There is so much that can be learnt from Kenny Burrell. For the purpose of this article, however, we’ve narrowed things down a lot and will be looking at the bluesy side of his work, in particular his playing style during his landmark 1963 Midnight Blue period.

The track I’ve come up with for this issue is heavily influenced by the track Chitlins Con Carne from the Midnight Blue recording. It is essentially a Latin-style jazz blues - great fun! A well-known cover version of Chitlins Con Carne is on the posthumous Stevie Ray Vaughan album, The Sky Is Crying. Example 1’s 12-bar blues ‘head section’ has the theme appropriately doubled by saxophone on all the single-note parts. These are then ‘answered’ by short guitar chord stabs or motifs. The phrasing is question and answer in nature throughout and for it to be played effectively it needs to have just the right amount of ‘swing’ feel. It’s harder to perform swing phrasing than you might think - it is definitely best absorbed by careful listening and then slowly and critically reproducing for yourself.

In this solo entry phrase we have a great Burrell phrasing device in which two successive licks contain exactly the same notes but the rhythmic phrasing changes. The solo pick-up in bar 12 is mostly played using eighth notes and the following phrase is mostly in a 16th note (dotted eighth rhythm). This is a great device to use in solos and can add a real sense of continuity as well as repackaging/presenting melodic material in a familiar yet fresh way.

Be very careful to observe the symbols for dynamics for the entire solo: all the solo lines should be played forte (loud) and the chord stabs should all be piano (soft). The whole idea is to make it sound as though there are two guitarists playing - one taking care of soft rhythm and the other being a louder lead player. It's a great skill to have, but is somewhat counter-intuitive, and as a result it's actually pretty hard to master. Kenny really does make it sound effortless, though! A good way of making sure the chords parts are quieter is to not play them with a pick. Try using either fingerstyle or a pick/finger combination. Experiment with all methods and use whichever works dynamically best for you.

One final point worth mentioning here is how the G-A notes are deliberately played on different strings in each phrase and are picked the first time and connected via a slide the second time. It's attention to this kind of detail that creates interest.

Example 3 The IV chord and back

As well as the swing eighth and dotted rhythms already mentioned, Kenny also tends to play a lot of triplet-based licks. In this IV chord approach in bar 16, we have a three-beat A blues scale comprising four 16th notes followed by two triplets that hit the root of the IV chord (D7) bang on the start of bar 17. In bar 18, the phrase leads back to the I chord (A7) via a short lick containing both the minor and major 3rd of A (C and C#). Then in bar 19, things round off by going back to the soft chord 'stabs' again.

Example 4 V to the IV chord

A this ending idea is simply a descending A blues scale line that ends up on a final ‘raked’, or slowly strummed, Amaj6/9 chord. It’s always E 19 appropriate to end a jazz piece on a hip-sounding chord voicing and this one certainly fits the bill! There are lots of others that would also work - why not experiment and try to find a few others yourself? Enjoy.