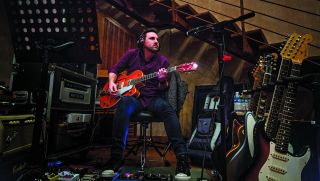 The world of the session player is a far cry from what it once was but despite the ever-increasing number of musicians out there, working opportunities still exist. Recording situations aren't as commonplace as they once were but combined with live engagements and other working situations such as instrument tuition, it is still possible to earn a reasonable living as a musician.

Acquiring this work requires getting your name out on the scene, building a reputation as a reliable, trustworthy and hard-working player and having many strings to your bow. The age-old rules of thumb remain as applicable as they ever have but in the current, modern musical climate, technology has expanded the parameters within which musicians must work. As technology has broadened our means of communication, as musicians we have to be present on as platforms as possible and be contactable at all times.

Below are some pointers to creating a recommendable reputation that could lead to receiving calls from other musicians. After all, you never know when one call/email/text could change the whole direction of your life and career. Making a career in music is as much about luck, being in the right place at the right time and also meeting the right person at the right time. Add into that mix buckets full of hard work, persistence and sheer tenacity and you're halfway there.

It's advisable to have a profile on all social media platforms, maintain them and keep them all up to date. Promote what you are doing, where you are playing, bands and artists you may be playing with and include photos. But it can be a fine line between 'mastering' these platforms and informing people or becoming a major annoyance to your followers with constant posts.

So gauge your postings and err on the side of caution. Make sure that if you have any sort of promotional material that your website, social media profiles and contact details are clearly listed. Never underestimate the power of a business card either; a card to the right person in the right situation can be the key that unlocks the door to a different world of musical opportunities.

Be aware that every gig you do, every recording session you play on is all part and parcel of building your reputation, so always put your best foot forward. Be punctual, be reliable, be flexible and be open to everything going on around you.

Listen to what other players ask of you, communicate your ideas if you are invited to offer them but if you're being hired to play for somebody or by somebody, listen to their instructions. Players and playing styles can go in and out of fashion but a bad reputation can kill your career.

3. Keep on top of musical trends

You might not think that current music has much to offer but try and keep on top of what is in the charts from time to time. Have all the classics under your belt but if a chart single takes off, be prepared to know it as most bands on a gigging circuit will jump on it.

Over time, you will build a repertoire of songs you know and are comfortable with but you might consider keeping chord sheets/charts for quick referral. Also, keep on top of fashionable techniques and who the hot players are internationally at any given time. You might be asked to copy their style at some point.

4. Get your sounds together

If you want to work as much as possible, have the tools (instruments, amps, FX) to cover all the bases and musical styles. Know how your gear works, what all the controls do, how they interact and how to get 'familiar' tones from your instruments.

Listen to the classic songs and research what the players used. A session player who knows how to get those sounds will find it much easier to network than a player with one guitar, for example, and uses one general sound. A one-trick pony is only good for that one sound or style.

5. Be seen on the circuit

If a gigging circuit exists in your area, visit the busiest venues that have live music and check out the bands that play. Hustle politely and introduce yourself to the musicians that play these venues regularly. But do it with good grace and manners – a pushy musician is annoying.

Swap contact details (those business cards will come in handy), make yourself available as a dep (deputy) or stand in and get your name out there. Sometimes it can take time so be patient, the phone won't ring automatically. On the other hand, it might!

6. Seek out the bandleaders and musical directors

Through conversation and research, establish who the band leaders are on the circuit and when it comes to moving up the musical ladder, ascertain who the musical directors are for various projects.

Although they may not be interested in conversing with you, this is where recommendation and keeping your reputation spotless can make a big difference. Sometimes, being on the radar of these people is about luck rather than your own efforts.

7. Broaden your network and playing area

Before the popularity of social media took over, musicians relied on their diaries/contact lists and their phones to contact other players. Reputation was everything. Now, you can market your playing wares across the globe with one post.

Times have changed and reputation can count for nothing if someone needs a stand-in at short notice. But what it has done is allow musicians to broaden their network of contacts and in turn, broaden areas where they perform. Being prepared to travel nationally and internationally can open up many possible avenues of musical work.

Be sensible when taking on work from other musicians; if your diary is very busy, is it really worth taking on that extra gig or session that might just suffer because you haven't got time to prepare for it? Doing a bad job is pointless and counter-productive so for the sake of an extra fee, why put your reputation at risk?

It may actually pay dividends to either pass the work to someone else you trust, or use it to repay a favour where someone may have passed some work to you previously and now you are able to return the favour.

Whether using your phone, tablet or PC/Mac, group your musical contacts into groups and sub-groups so that contacting swathes of musicians regarding a gig or session is a whole lot easier.

If you need a drummer for tonight's gig and you only have three hours before showtime, it's much easier to send a message to the drummers you know if they are grouped together. Or say the gig is in London, you may wish to contact the individual drummers in your London Drummers group. Nevertheless, it saves time.

We all have to sleep but we now live in a world where people almost expect replies to messages and calls almost immediately. Very often, this isn't possible, but try and remain up to date with your social media channels and electronic means of communication. Snooze and you lose.

Not replying or responding is seen as bad manners but life becomes less stressful and hectic if you try to keep on top of it. The flip side is you might miss networking opportunities from players who have been passed your contact details. If you don't respond to a query promptly, it could be long gone by the time you do respond. Always try to make a good impression at the first time of asking.

If you live in a city and don't own your own transport, make sure you have a plan to get yourself to venues and studios and have a backup plan in case your preferred option is not feasible.

Not being able to get yourself to where you need to be is a definite 'no-no' in the world of music. Time is money and if you're late for a session or gig, you may not get a second call in the future. Reliability is paramount! Then there are the costs related to getting yourself around; unless you are prepared to work for free, factor in the transport costs when taking a session or gig.

Sometimes the opportunity to work with other musicians and potential future work may outweigh the fact the session or gig are poorly paid.

It pays to remind people you are out there so periodically touch base with your contacts, whether it be a message, email or phone call. There are millions of musicians out there, it's very easy to get lost and forgotten among the sheer numbers of musicians entering the business every year.

Just a simple 'how are you, hope you're well' message can re-establish a connection from years earlier and lead to a renewed working relationship.