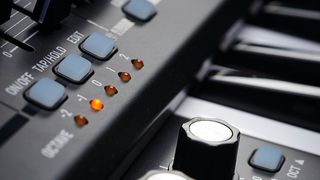 Since the DM12 synth was first talked of a couple of years ago, there was much speculation regarding what the folks at Midas and Behringer would be bringing to market. Even once the first teasers dropped, nobody believed that this 12-voice poly with its extensive modulation matrix and effects by TC and Klark Teknik would ever actually appear.

Appear it did, though, and very nice it turned out to be, too – a well-priced analogue polysynth offering a solid sound, plenty of modulation potential and a gloriously hands-on workflow. If you've just got your hands on a DeepMind, these ten tips and techniques should get you off on the right foot.

The DM12 has a very mouldable, ‘chameleon-like’ tone, but if it’s old and drifty you’re after, employing the oscillator and parameter drift options works wonders!

Setting up mod routings is a breeze on the DM12, despite its plethora of sources and destinations. Press/hold the Mod button, dial in your source (or move a wheel/press a key) set a positive/negative modulation depth amount, then hold the Mod button and move any slider (or data wheel) to assign the destination. You can repeat this for as many modulation slots as you wish (there are eight in total), giving a huge amount of control over the sound and enabling you to sculpt the most intimate details. And as you can also modulate the effects using the mod matrix, the possibilities are endless!

Assign Aftertouch to Bend Pitch in the matrix, or use the ‘fingered’ portamento options to glide between notes only when they’re played legato-style.

For dirt, first try adding in some of DCO2 alongside DCO1, and modulate the ‘tone mod’ using an LFO, or use the Resonance slider - try both filter modes here for different effects (the 12dB has more grit in the top-end).

Try using a single LFO sent to filter or pitch (or both) at high speed and medium depth to add audio rate modulation (for growl/texture). Then try the Bass Boost, which adds more girth, plus white noise for additional vibe.

Finally, you have several dirt-inducing effects to employ singularly or simultaneously, including the multiband distortion and rack amp.

Instead of using a mod matrix slot, hit ‘edit’ under DCO1 & 2 and set your Aftertouch and Mod Wheel Pitch-Mod amounts in the menu.

DM12 provides a few ways to get wide sounds. First, Pan Spread spreads the oscillators out across the stereo field in a subtle or big way, depending on the level set. This can be a modulation destination, too, for adding drama to pads, effects, brassy sounds and leads… anything apart from basses, which you want to keep centred. A little reverb or chorus together (or the combined chorus-reverb effect) also goes a long way to adding depth and width.

Finally, try the Autopan effect (you can get authentic Rhodes Suitcase-style auto-panning with this), or the Rotary Speaker, which, used subtly, can add movement and width, too.

By switching in the ‘Chorus D’ effect and using only the SW4 stage, you can get some very Juno chorus-ish tones! Add Pan-Spread for extra wideness.

The DM12 is a tweaker’s paradise. All the sliders are fair game for playing as part of a live performance (or recording as MIDI into your DAW). The pitchbend and mod wheels can be assigned to multiple destinations in the mod matrix (as can aftertouch), plus there’s assignable foot pedal control (and sustain). Experiment with routing velocity to filter, amp or other destinations, too.

For a more hands-off approach, use the arpeggiator, LFOs, envelopes (and mod envelope), plus the Hold function and Control Sequencer, to automate and evolve your sounds over steps/time.

To bring out those lows, use one of the EQ effects or the Bass Boost button, which raises the low mids/bottom. On the other hand, if you want to dial down the lows, use an EQ effect or the High-Pass slider.

MIDI-sync the Control Sequencer to your DAW, for all manner of bleeps and off-kilter rhythms. Using the mod matrix, set up three or four mod slots using Ctrl Seq as the source, then set random depths for each one. Next, go back to the sequencer, set it to play 16 or 32 steps (or an uneven number for weirder rhythms), press Hold (so it plays a continuous loop), then randomly dial in levels for each step (some positive, some negative).

Finally, set the Control Sequencer to modulate FX per-step, then try another mod slot to control noise level - don’t forget to add swing for bounce, too!