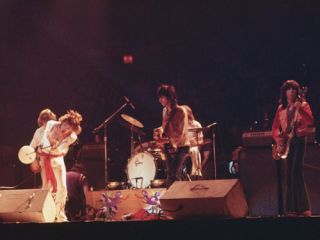 We delve back into the GT archives to reminisce about another year in guitars, music and world events…

Fender cease to manufacture the Telecaster Thinline. When introduced in 1968 the hollow bodied Tele was greeted with delight as it followed the basic lines of the standard instrument. Bodies were of mahogany or ash with a larger scratchplate, the definitive f-hole and the control positions were rearranged. Fortunately all is not lost as a twin humbucker version is under development and this new model is set for release next year!

The BBC begins Open University broadcasts, the Blue Peter children's show buries a time capsule to be opened during the first episode of 2000, the Old Grey Whistle Test arrives on BBC 2 and the final episode of the Ed Sullivan Show is shown in the States. 40,000 attend the Concert for Bangladesh in New York and Walt Disney World opens in Florida.

Guild introduces their new humbucking pickup, larger design with three screws for accurate adjustment. It is used on virtually all the guitars in their ranges and the top models of Starfire guitars also get a master volume control. The Guild M75 Bluesbird semi-hollow model is dropped although the solid versions are still available. Bob Moog introduces the MiniMoog at this year's NAMM Convention and it's destined to become the most popular synthesiser of all time.

Jennings produces one of the strangest guitars ever with their Rifle Range. With tiny 'gunstock' shaped bodies the Outlaw guitar has twin pickups and 'rifle sound', the Winchester introduces 'electronic tones' with presence, treble, bass, fuzz, repeater and changeover from electronic to guitar pickups, and the Gunman bass has two pickups, fuzz and rifle sound. All have through body stringing and are priced £75 to £88.