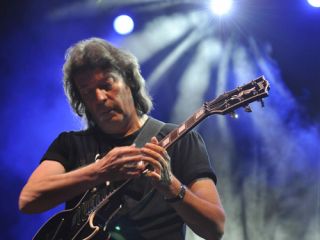 From the GT archives - A minute with a great guitarist is enough to discover what really makes them tick. This time we quiz the legendary Steve Hackett...

There have been lots of great gigs from the Dog & Bucket to Madison Square Garden! In a small venue you can take risks as it's not make or break for anyone's career, but it is great when a crowd of thousands is cheering you on.

The first gig I ever did with Genesis at London University when my amp fed back all night, which made me forget nearly everything I learned. I died a thousand deaths of embarrassment and shame but it was an important baptism of fire and a rite of passage.

To always keep going no matter what and to enjoy every gig rather than endure it.

I generally find if the hair is right everything else falls into place!

My greatest night of the living dead would be Paul Butterfield on harmonica, Keith Moon on drums, John Entwistle on bass, Edith Piaf on vocals and Roger King on keyboards (he has to be regularly dug up every night to perform with the band).

Present company excepted, who's the greatest guitarist ever?

Myself aside, I'd let Jimi Hendrix sit in for a number or two.

Is there a solo by anyone else that you wish you'd played?

Peter Green's version of So Many Roads with John Mayall's Bluesbreakers.

What's the solo or song of your own that you're most proud of?

There's a piece called The Phoenix Flown on my forthcoming album, Beyond The Shrouded Horizon, on which I feel every note because it's melodic, it's powerful and it really takes me places.

For being true to my dreams.