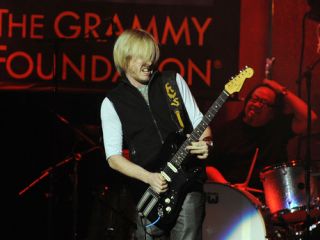 From the GT archives - A minute with a great guitarist is enough to discover what really makes them tick. This time, US blues player Kenny Wayne Shepherd…

Who was your first influence to play guitar?

There have been so many players, but the biggest single inspiration was Stevie Ray Vaughan.

What was the first guitar you lusted after?

My 1961 Stratocaster is my number one guitar and I'll never forget the day I got it.

Every gig is special, so I can't really choose one.

With a pedal board, there are many cables and it takes a while to figure out which one went bad. This can be a tremendous problem in the middle of a show.

What's the most important musical lesson?

Play from your heart. It doesn't matter how many notes you can play, what matters is WHICH notes!

Every night on stage. That's the best practice, playing live. I find that when I'm on stage I play with a different level of intensity than if I'm at home playing.

Most of the time I walk out on stage without warming up. The most important thing I do before a show is to have a few quiet moments to get 'spiritually centred' before I walk on stage so that I am confident that I am coming from the right place.

The band I have now. Chris Layton from Double Trouble is one of the best drummers alive, and my bass player Scott Nelson and Riley Osbourn on keyboards really help lay it down with power, and Noah Hunt, my lead vocalist belts it out with the best of them.

Who's the greatest guitarist that's ever lived?

There have been many 'greats', but there will never be a 'greatest'. That's a fact when you are talking about artists.

Voodoo Child (Slight Return) by Jimi Hendrix. I think it's one of the best guitar songs of all time.

What's the solo/song of your own that you're most proud of?

Blue On Black is one of my proudest moments. But I am very proud of many of the songs on my new record LIVE In Chicago, and also my new studio. I'm proud of the maturity I hear in my playing compared to my earlier recordings.

Ultimately, as a great father. But I'd like to be remembered as a guy who played to the best of his abilities every time he walked out on stage, and in the process brought some joy into people's lives.