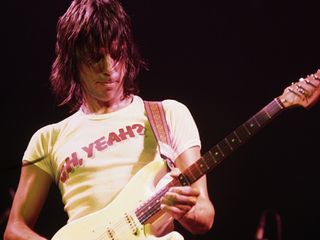 Welcome to the fifth and final part of our special feature showing you how to dramatically increase your rock soloing potential, and boost your fingerboard knowledge at the same time. If it's your first time here, please check out part one for background information and the first 10 licks, part two for licks 11-20, part three for licks 21-30, and part 4 for licks 31-40. If you've already mastered those, let's go...

The only thing that separates many classic rock phrases from their closely related blues cousins is the amount of gain and dynamic attack. This lick is one such example and would be equally at home in either setting.

The first bar of this example features a triplet hammer-on pattern that toggles between the use of the major 6th and the flattened 7th intervals, both present in the harmonically appropriate Dorian mode (R 2 b3 4 5 6 b7). Paul Kossoff was particularly fond of using this kind of idea. He also had one of the best vibratos in rock (ask Joe Bonamassa), so we'd urge you to check him out!

Here's a pedal-tone idea that is melodically simple yet retains interest via the use of some crafty slides. It's also got a rather interesting rhythmic shape. Why not keep the rhythm and change the notes to come up with an idea of your own?

We can view this pattern as a descending four-note group that has been shifted forward by a single 16th note, or alternatively as a three-note pattern that goes 3 2 1 3, and then descends from each scale degree in turn.

And here's the ascending form of the same pattern.

Randy Rhoads was responsible for this one, although Django definitely got there first, and Les Paul wasn't too far behind! We're essentially trilling from the semitone below each chord-tone to the intended target note. Aim to stay in time. You can start with 16th-notes (four notes per click) and aim to work your way up to 16th note triplets (six notes per click).

Our penultimate example comes to you courtesy of Journey's Neal Schon, and features the popular add-on to the minor pentatonic of the natural 2nd degree, creating a scale with the logical title of minor pentatonic add 2 (R 2 3 4 5 b7). In the second bar we also see a brief appearance of the flattened 5th, giving us effectively the blues scale (R b3 4 b5 5 b7), another hugely used scale in all rock styles.

You may remember (Area 2, Ex 2.10 to be precise) that there were two main pathways to get you through the minor pentatonic scale just by using tone gaps and slides. Well, here's the second. You can view this as three versions of the same two string pattern in low, middle and high octaves. Any phrase performed in one can be instantly transposed to the next. Simple, but really useful!