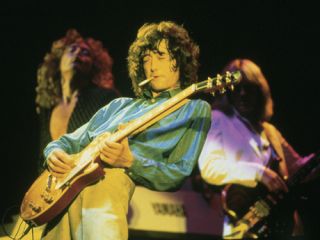 Jimmy Page in 1979: he helped to write the book on rock licks and soloing © Neal Preston/Corbis

The main focus here in terms of vocabulary is classic rock, which we're going to define for the purposes of this study as pre-Van Halen, so you'll find no eight-finger tapping, no three-octave sweep picked arpeggios and no 32nd-note legato monster licks. What you will find, however, is a choice selection of medium-tempo classic rock phrases that are stylistically diverse, melodically flexible, and display a wide range of articulation and dynamic devices.

They are all also completely useable to guitarists of many levels and in a variety of settings. It's arguable that it's this mid-tempo range phrasing that really establishes the character of a rock guitarist. When the tempo gets cranked up there are generally less workable options.

You'll often find the same fingerings and melodic pathways being adopted by a large number of players, but it's the melodic phrasing and note selection that really allows their personality to shine through.

This study divides the fretboard into five areas, or positions. As the pentatonic scale forms the basis for a huge amount of rock soloing, each area relates directly to the scale's associated CAGED minor form (see below).

For each area of activity we have presented ten different ideas - a lick, a melodic fragment, or some form of sequential permutation of the notes. Whilst the pentatonic scale is generally at the core of each idea, we are by no means restricted to it exclusively.

Follow the associated text for each idea and all will become clear. You have two strategic choices when approaching this study. The first is to work through each idea in sequence with a single isolated fretboard position. While we're at it, ensure that you can move each idea through a selection of keys.

It's fair to say that rock styles tend to favour the keys of E, A, D and G, so start with these before eventually aiming for fluency in every key. The second option is to read through the pages, and therefore move along the fretboard horizontally. Moving each associated idea (bends, for example) in sequence through each of the CAGED minor pentatonic shapes.

Why not purchase an A4 folder with five pockets, one for each position. When you learn a new phrase, or create one of your own, simply pop it into the appropriate pocket. Every couple of months you can then review your research, making note of which positions you favour, and crucially which ones are a touch on the light side.

You get nowhere by brushing stuff under the carpet, so once you spot a weak area, or fretboard 'blind-spot' you can then take remedial action. Another way to expand your knowledge is to imagine you have to write all of the examples for this lesson, and you can't use any of the ones we've already presented. Go on, we dare you! You'll learn a huge amount in a very short and focused time, I promise you.

Let's begin with a Brian May-style lick. It's got an interesting melodic shape, a great rhythmic structure, a marvellous sense of flow and perfect grace and composure. What more does a great rock lick need?

We could have filled this entire article with bending licks from this area! We'll just give you this Hendrix-inspired chord-tone beauty and leave you to find the other 49 for yourselves. Intonation and control are the issues here so use your ears and watch your tuning.

Before there was Paul Gilbert, there was Steve Morse. Without divulging the picking secrets of the 'Rock Guitar Magic Circle Society, examine how the hammer-ons in bar 2 facilitate greater speed and stamina.

Where would Thin Lizzy (or indeed Jimmy Page) be without this lick? We're looking at a descending sequence of three notes, transposed to each potential starting note from the minor pentatonic.

Here's the reverse ascending version. Notice that this is not an exact mirror image of the descending version, but when you attempt to connect the two up at any point within the sequence everything should make perfect sense.

We shall ease you into our triadic based section with a simple three-against-four idea. Again, intonation (tuning between the notes) is a huge issue, so make sure you're perfectly in tune.

Down in Louisiana, a boy named Johnny (okay, only my mother calls me Johnny and it was really Liverpool) came up with this double-stop lick. The thickening effect of playing two notes at once is remarkably effective when projection is an issue.

Before there was Yngwie we had Randy! This three-notes-per-string finger-twister neatly boxes in our first area pentatonic shape, and fills in the scale tones courtesy of the Aeolian-endorsed and metal-approved flattened 6th (F) and natural 2nd (B)!

Unison bends sound great. Fact! None more so than when Jimi Hendrix employed them. Here we're spelling out the harmonically sophisticated Am11th arpeggio (A, C, E, G, D). Who said rockers couldn't mix it with the intellectuals?