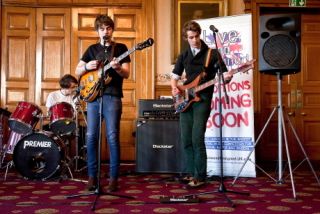 Above: Littlemores were one of the first acts through in Dewsbury and the judges commented that it was, "good to see a band singing in a regional accent, sax and trombone worked well. Good unit and good front man."

The first batch of Live and Unsigned 2011 auditions took place last weekend in Basildon, Cardiff and Dewsbury, with over 900 acts battling it out for a place in the regional final showcase.

As a way of providing useful feedback for the entrants and other bands out there, Live and Unsigned have posted a selection of the judges comments from each region - you can check out Cardiff's and Dewsbury's now, with Basildon's promised for later today. And watch this space for videos of some of the opening weekend's best acts.

Rock band Lockin: one of the judges commented that they were, "one of the best harder bands of the day, love the music breaks."

The next auditions take place on Saturday 22 January at the Beck Theatre, Hayes, Middlesex and on Sunday 23 January at Sheffield City Hall, so if you haven't applied yet, don't hang around - you can apply to enter Live and Unsigned 2011 here.

Prize for the winner of the Live and Unsigned final this year includes a management and recording contract including funding towards a UK tour, single release and publicity for the successful act.