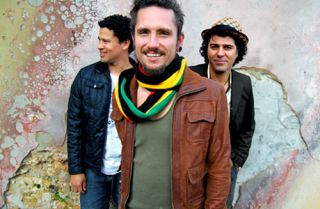 The John Butler Trio are an Australian roots-rock export combining elements of rock, reggae, blues, hip hop and aspects of world music. We spoke to Butler in issue 329 (onsale now) and also got a chance to see John and his all-new line-up get put through their paces in Southampton on the band's recent tour.

This new line-up, featuring Melbourne musician Nicky Bomba on drums and percussion, and Byron Luiters (from Ray Mann Three) on bass, was behind Butler's most recent release, April Uprising, which we reviewed in issue 328. After being so impressed with the album, we were keen to see the new Trio in their natural environment. We weren't disappointed.

Before we get onto the main event, we must give a quick mention to the support act, Mama Kin. We were blown away by Danielle Caruana's smooth soulful voice and the elegant simplicity of her songwriting. Check her out at the Mama Kin website.

The Trio offered up a packed set that ran for over two hours. Butler displayed his myriad talents and playing styles across the many instruments that he's used on previous albums, including his main squeeze, the Maton 12-string acoustic, his Larrivée six-string (both played through a Marshall stack), a Fender '72 Deluxe Telecaster, a National dobro, a Weissenborn and even a banjo for good measure.

The set opened with the smooth-grooved, up-tempo Used To Get High, instantly electrifying the atmosphere of the packed-out venue. The set included fan favourites such as slide spectacular Treat Yo Mama and the radio-friendly Better Than and Zebra.

However, the evening's main highlight was witnessing John's beautiful instrumental rendition of Ocean. The audience stared in slack-jawed amazement, as Butler got himself totally in the zone, seemingly disconnected from the show, as if he was playing it for himself at home.

Other highlights included Butler's duet with Mama Kin on the track Losing You and Nicky Bomba's drum solo, displaying even more of his funky grooves and fast chops, even getting the crowd involved at one point. The entire show radiated energy, as the excitement of the new Trio's first time on the road together was palpable.