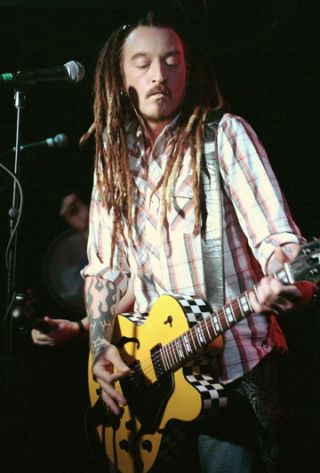 You can learn a lot about the guitar from Ginger - all the way from The Quireboys to The Wildhearts and now a guitarist in the solo band of Hanoi Rocks' frontman Michael Monroe, he's always been rock n' roll through and through.

There's been ups and downs all along the way but his enthusiasm for the guitar has never been greater. Regardless of whether your a fan of his music, Ginger's sheer joy for playing is infectious, as he explains…

"When I saw Kiss and it made me want to do this forever. Seeing Ace Frehley and Paul Stanley at the age of 14 or 15 was it for me. I had an interest in the guitar before then but this was different. It wasn't just them but the audience as well. I'd seen a few bands before that but there was such a feeling of submission from the audience this time.

"At that moment I was both onstage and in the audience - without sounding too whacky, I saw my future. I knew exactly what I was going to do and all the talk from parents about getting a job, it wasn't going to happen."

"The first guitar I took onstage was a little red Westone that I loved. I swapped it for a blonde Strat. The Strat was so crap I swapped it back for the Westone!"

"For the first year or two I spent a long time developing what I thought was my style. Until I head AC/DC and I realised I was just playing in their style. I thought I'd invented it!"

"I was so nervous - I'd been pushed into the deep end by a friend of mine who had a band that I loved called The Letters. I was so nervous it was like I was displaced from reality. It was like the first time I ever took drugs.

"The gig was about half an hour long but it felt like it lasted a second for me, it was so psychedelic and dreamy. It made me realise I wasn't really ready for it - I hadn't had any lessons and didn't know what I was doing. And that's why people shouldn't learn to play too well before their first gig because it'll be exactly the same [as me], it just goes by in a second."

"The most I've ever paid for a guitar was for a BC Rich Bich bass, And I paid for it over two years because I was in a band and I'd use the money from the gigs to pay of this bass. I won't say the name of this band but right at the end when they found out I wanted to join another band they got some heavies to come round and give me a kicking and steal the bass.

"At this point I realised I'm going to have to play the guitar because I haven't got a bass anymore. Then I started getting work - so I can thank that band for making me play guitar. And also over the course of the Wildhearts, nearly every member of that band wanted to audition for the Wildhearts. They all became really big fans.

"So I used to send them to imaginary locations on imaginary days and tell them there were auditions. I got my own back in more ways than one but I have to thank them really for making me play the guitar."

"I've always been a Les Paul guy but it's the Telecaster I'm using at the moment. I've just had a Hot Rails pickup put in and it's so powerful, I A/B with a Les Paul onstage the other day and the Les Paul just sounded puny. This thing's a monster - I'm in love with it right now.

"I like cheap guitars though. I smashed guitars, treated them like shit, favoured cheap ones instead of expensive ones, set them on fire, gave them away… threw them into audiences, stuck stickers on collector's guitars. Outwardly I had no respect for the guitar whatsoever but I'm still playing them and the guitar is still my best friend. We've got a strange relationship but a guitar isn't a child to me, it's a good friend. If it can't take the pace then our friendship isn't going to last very long."

"My Les Paul - it's 25th anniversary from 1972 or something and I've had that since 1986. I got it to go New York to join The Throbs in about 1986. I thought you have to have a black Les Paul if you're going to New York to join a rock n' roll band. I went to the guy's house in Muswell Hill to buy it. It was literally like the Addams Family - I opened up the case and there were cobwebs. I got it for £250 and it's been valued at £5,000 now. That thing's been through the wars - it's fallen out the back of transit vans, the headstock been dislocated. It's still a great studio and live guitar. It's probably my most cherished guitar."

"We played with Guns N' Roses the other day and everything that could go wrong, went wrong. From my wireless didn't work and we were playing on this ridiculous stage, so big I couldn't even see the guy next to me in the band because he was so far away.

"My wireless pack didn't work so I was on a lead, the other guys' packs worked perfectly but the lead didn't even work. It kept cutting out the whole time and by the end of the set my signal just went off. That was progressively disastrous but that stuff happens all the time, it's more about how you deal with it. Get to the end of the show and shrug it off - it's the scars of war."

"The myth is that I'm not a very good guitar player. When I play with a good guitar player they're actually quite surprised that I can keep up. I was brought up on country and you have to learn some chops to play country, you can't play bad country.

"I was also weened on The Ramones. Between country, The Stones and The Ramones you get to be a good rhythm player. The Wildhearts never got a lot of respect, maybe deservedly so because our antics used to overshadow the music, but we had our chops down."

"I get them all the time - going onstage with Michael [Monroe] and getting the solos right. I'm onstage with Steve Conti from the New York Dolls and he's got years worth of chops - that guys such a tasty player. Doing the weaving guitar work with him, every gig I'm learning a little bit more - everything is a breakthrough for me. Still getting excited about playing the next gig is a breakthrough for me.

"Not many people at my age, who have been playing guitar this long are literally thrilled about playing their next gig. And I can't wait. Singing in a band? Different kettle of fish. I wouldn't mind if I never sang in a band ever again. I do that purely for the people that come to see shows. I get something from that but guitar playing; I'm doing that purely for me."