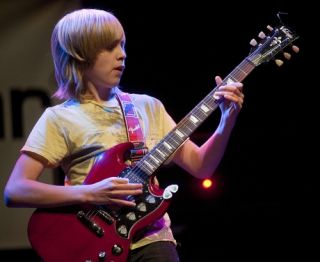 Chief judge in the YGOTY and GOTY finals, Neville Marten (editor of Guitar Techniques and former editor of Guitarist), had this to say: "The standard of playing in the finals was breathtaking - we've come to expect it of the senior entrants, but the young guitarists amazed us all." Clearly impressed, he added: "I don't think any of us could have dreamed of being even half as good at just 13 years old!"

All done and dusted, we congratulated Will McNicol as AGOTY, James Bell as YGOTY and Rick Graham, who took the top prize of Guitarist Of The Year.

Well done to all. We'd also like to say a massive thanks to our sponsors, Takamine, Blackstar and Vigier, the staff and crew at The Southbank Centre, IGF and The London Guitar Festival, our judging panels and, of course, all the entrants and their families who journeyed to London to compete. Here's to doing it all again next year!

13-year-old James' fretboard pyrotechnics, stylistic variation, compositional maturity and confident performance earned him the YGOTY crown. James is a talent for the future, aided by his prize package of Blackstar HT Stage 60 and HT-1 amps, and a place at the IGF Summer School in 2012.

Acoustic Guitarist Of The Year - Winner: Will McNicol

Will McNicol from Bournemouth, in Dorset, triumphed on the day with a stunning performance of his tune Emma. Will played his Taylor NS32ce guitar, mixing a wide range of techniques and textures around a beautiful melody that brought together skill, taste and a direct emotional connection with the audience and judges. Will took the last exam of his degree the day before the final! His prize, courtesy of sponsors Takamine, was a stunning EF341SC, plus a string of live dates at IGF festivals during 2012.

The last performer on the day, Rick Graham from Southport, took the coveted GOTY crown. Playing his Suhr Custom Modern, his combination of a strong melodic approach, obvious technical mastery and a compelling live performance earned him the highest score from the judges. Nick had his choice of a Vigier GV Wood or Vigier Excalibur Ultra as his prize. He will take up a series of performance and teaching slots at IGF festivals in 2012.