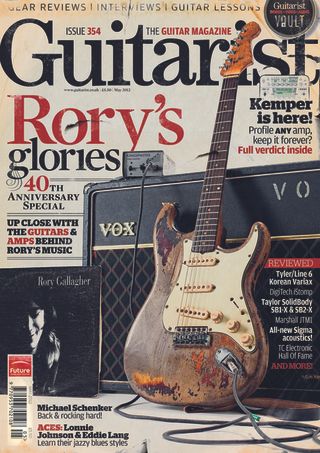 Only in issue 354 of Guitarist…

To mark the 40th anniversary of the late Irish guitar legend embarking on his incredibly significant solo career, Guitarist sat down with Rory Gallagher's nephew Daniel, who has restored and remastered his solo albums to their original glory, and took a journey through the great man's finest hours

PLUS! Rory's gear is almost as iconic as the man himself, and Guitarist had the privilege of getting up close with some of Gallagher's most beloved gear, including THAT 1961 Fender Stratocaster…

We sat down with the legendary German guitarist to look back at his hugely-influential career, from the Scorpions to UFO and beyond.

We sat down with the Brit rockers' lead singer and guitarist Grant Nicholas and talked about his long-time love affair with the Fender Jazzmaster.

We chart the criss-crossed careers of two early jazz pioneers who had a huge impact on much of the guitar music that followed. With technique style file and Guitarist Vault audio.

Guitarist travelled to New York to sit down with larger-than-life Electro-Harmonix CEO Mike Matthews, learned about the star-crossed history of this venerable and beloved effects maker, and got the inside track on some seriously interesting new projects in the pipeline…

The Kemper Profiling Amp claims to be able to capture a perfect digital fingerprint of any amplifier you plug it in to, with all the nuance and eccentricity of a proper valve amp, then store it forever should you ever need it. Too good to be true? The future of guitar recording? A genuine game-changer? Read the review and listen to the Guitarist Vault demos to find out…

Rocksmith - This ain't your granddaddy's Guitar Hero! We take a look at the unique new videogame that lets you play along to your favourite songs using a real guitar…

Guitarist issue 354, is available now from all good UK newsagents. Non-UK readers can purchase a copy from www.myfavouritemagazines.co.uk, or UK readers can subscribe and receive a free gift!