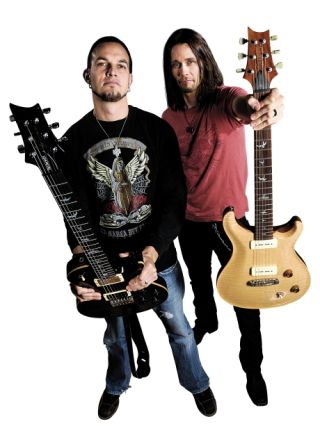 Our Greatest Guitar Solo Of All Time poll certainly caused some fierce debate amongst guitarists… and that was just in our office.

Choosing the 'greatest' guitar solo is obviously extremely subjective. But Guitarist had other motivations too - we were eager to see how many modern solos have impressed you all in the thirteen years since our last solo poll.

The results were suprising. For the full rundown experience, complete with clips and details, click here.

After asking for your nominations, we took the 20 most popular and asked for you vote on which your though was most deserving here and at MusicRadar.com.

The Eagles' Hotel Caliofrnia, winner thirteen years ago, dropped to fourteenth place in the end. Fanbases were motivated and old favourites suffered. In the end Alter Bridge's 2007 song Blackbird triumphed with its guitar solo played by two men: Mark Tremonti and Myles Kennedy. We spoke to the duo to find out their reaction, but first here's what the top 20 looked like after all the votes were tallied:

So what do the winners think? Let's find out…

Congratulations Mark and Myles - how do you feel?

Myles Kennedy: "Thank you! Really honoured to have even been included among such iconic solos. A little uncomfortable with the idea that it was voted the 'best'. I don't necessarily agree that our solo deserves that title - at least my half :)"

Mark Tremonti: "It was an immense honour to be nominated in this poll. Looking at the other listed nominees it seemed absolutely impossible to win. We definitely feel unworthy and want to thank our die-hard fan base for voting!"

What are your memories of writing the Blackbird solo together?

Mark: "The Blackbird solo was the last one written on the album. I felt a lot of pressure because the song itself seemed to be everyone's favorite. I must have written three rough outlines of the solo before tracking."

Myles: "We were in Nashville back in 2007 working on the Blackbird record. I remember sitting in the apartment Mark and I were sharing and coming up with a basic outline by rehearsing the chord changes and having an idea how I wanted to phrase the solo. I didn't have a 100 per cent set way that I intended to track it since I like to keep things spontaneous while in the studio. Otherwise for me it can get too 'rehearsed' and stiff."

Thirteen years ago when we last ran a greatest solos poll, The Eagles' Hotel California won. That was a two-man guitar solo too, do you think they are underused in rock?

Mark: "I definitely enjoy hearing two different approaches on a solo. I prefer each player taking a turn rather than harmonizing the same pattern…"

Myles: "A lot of the bands I grew up listening to utilized the 'twin guitar attack'. I have always been drawn to that sound. Judas Priest, Thin Lizzy, Allman Brothers, Maiden and even Television have shown me that an interplay between multiple players adds tremendous depth to a bands sound. I would love to hear more of that today."

What are your own favourite guitar solos of all time by other artists?

Myles: "For me Comfortably Numb is definitely on top of the list. David Gilmour hit it out of the park with that one. Also, Hiram Bullock played a spectacular solo on Sting's version of Little Wing that is one of my favorites. Both of these solos had a profound effect on the way I approach the guitar. Both solos hit the chord changes much like a jazz player would. My ear has always gravitated to that sound.

"Oh yeah....I can't leave out Eruption. That was a definite game changer. A lot of us would not have picked up the guitar if it wasn't for Eddie."

Mark: "My favorite solos tend to focus mainly on feel and phrasing rather than technique. At the top of my list would be Gilmour's Comfortably Numb and Stevie Ray Vaughn's Lenny."