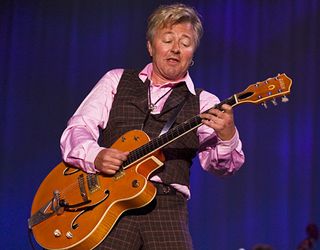 Here are the dates confirmed so far.

There are also a number of shows confirmed throughout Europe, which are listed on Brian's official site. Support comes from Brian's Stray Cats cohort Slim Jim Phantom and the last time Slim appeared at the Brixton Academy, he fell off the stage and broke his arm! Here's hoping it goes better this time around.

BS.com has all the latest news and ticketing details and we'll see you down the front.

Here's Brian doing his thing with his trio that forms part of the bigger Brian Setzer Orchestra show that continues to slay the US and Japan on a regular basis...