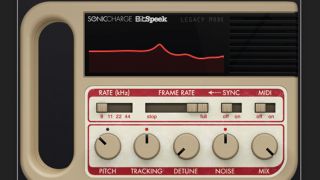 Want to make yourself sound like a Speak & Spell? We can show you how it's done.

Vocal processing plugins let you do all sorts of amazing things to the human voice, from subtle enhancement to all-out transformation. Here are six prime examples of the kinds of things that are possible.

For more on vocal processing, grab Future Music 296, which is on sale now.

Antares Auto-Tune, now at version 8, is designed to gently correct a vocal's pitch to the nearest semitone within a user-defined key and scale. By setting the Retune Speed to maximum, the vocal's pitch is corrected at an unnaturally-fast rate, resulting in the clichéd robotic warbling effect.

Harmonisers generate artificial harmonies from a single vocal track - useful when you want to create a new harmony part from a vocal sample, for instance. In our example, we've layered two identical copies of a lead vocal, with different harmoniser settings applied to each.

Harsh high- and low-pass filtering and distortion is the DIY way to replicate the reduced bandwidth of a telephone signal, but Audio Ease's Speakerphone 2 can take this concept much further, placing a voice down the end of a 'sampled' telephone using its advanced convolution modelling.

Sonic Charge's BitSpeek 're-synthesizes' a vocal to create the metallic, rubber-like robot voice of 1980s Speak & Spell toys. Set Tracking to 0% for a monotone robot voice which can be tuned (and detuned), and cheapen the circuitry by reducing the Rate slider.

If you want Stephen Hawking to lay down lyrics over your next hit, you'll need a text-to-speech generator or voice synthesizer plug-in. Plogue's chipspeech is a particularly musical option: type words into the plug-in's text box, then play MIDI notes to trigger the words at the desired pitch.