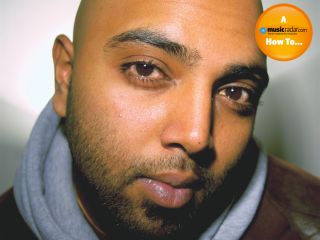 Over the past few years, Gove Kidao, better known as Sabre, has been making waves in the drum 'n' bass scene with his eclectic take on the style.

Since his debut in 2004 he's released tracks on Metalheadz, Renegade Hardware and Horizons Music. As well as producing his own tracks from his base in North London, he DJs around the world.

How did you get into music production?

"Around about 1996 I'd already been a DJ for a few years spinning hip-hop and jungle, and I started to meet with the more experienced local names that were dabbling with production. I was just hanging out and watching them jam, but straight off I was surprised at how simple the routines were. I knew I could master those skills, so I decided to give it a go.

"Initially I was just experimenting with demos from PC Format magazine and linking with other producers to get some experience using their kit. It took a while to get to the stage where I was completing tracks, but that became easier as technology became more affordable, and by the millennium I was pretty competent in the basics. I had lots of musical imagination, and I began wondering if I could turn this hobby into a career."

So did you have any previous formal musical or production training?

"I played clarinet for a few months when I was young, but I was shit at it, and I forgot most of what I learned by my teens. I have had technical training though, firstly in audio engineering at university, which I quit before completion to go and pursue a traineeship with the BBC.

"University was about the recording studio environment and insights into the music industry. The BBC, on the other hand, was training me to do live sound for broadcast, and between the two institutions I was lucky to get a decent variety of info. To be honest the stuff I learned at the BBC was far more useful because it was hands-on, and I was able to absorb other people's own personalised methodology."

What are the best things about your chosen career?

"The best bit has to be creating a track that has the potential to leave a lasting memory with somebody, something that becomes synonymous with an era or an event in life.

"Hearing through people's feedback that a track has succeeded in that respect is hugely satisfying, and in many ways very humbling because so much of my motivation to be creative comes from wanting to emulate the evocative tone of art that I've found inspirational. It always seems so unlikely to me that I'd be able to capture that spirit, but people seem to think I've managed it with certain songs. I still get really embarrassed when I receive a compliment like that, even though inside I'm thinking, 'Mission accomplished'!"

"The worst part is people who aspire to be creatively credible in their own right using your artistic limelight to further their own prospects by becoming label bosses, or promoters, or radio station managers. Those are jobs that for the health of any scene need to be occupied by business-minded people - leave the creative stuff to the artists!

"Also, I'm worried about piracy and the impact it will have on the aloof studio musician who doesn't really want to become a touring artist. That's not really me - I was a DJ first, and I love the stage - but it's sad to know that this ability to be reclusive is becoming more of a challenge, because as a mindset, it's heavily conducive to creating exciting underground music."

How does your average work day pan out?

"There's no such thing as an average day! I don't really have preferred hours of working, so it's just a case of devoting time to sitting in the studio and working whenever I'm feeling creative. When I'm not feeling creative I don't fight it, I just occupy myself with something else - preferably something artistic and provocative so that I do start to feel creative.

"The only time things get more predictable is when I'm doing a lot of foreign gigs. You spend your time on messaging services or paying visits to producer friends to stock up on new music, the gig days themselves are really frantic and you end up seeing more of the airport than the city centre half the time.

"It can be quite a lonely experience, especially since by now your body clock is out of sync with that of any of your friends and family who run a normal life and work sensible hours."

Aside from writing and production skills, what else do you need to be a successful electronic artist?

"Nowadays it's essential to have a grasp of brand management. Being an artist, you as a person are the product, so mastery of the necessary tools to shape your public persona, especially online, is a huge advantage.

"I think you also need to have a genuine passion for technology - it's so easy to fall out of the loop and all of a sudden find that your toolkit and techniques are becoming redundant, while others are pushing envelopes using resources that were previously unavailable."

How important is DJing to your career?

"I think in this era it's wise to equip yourself to be a performer, but that doesn't mean you have to be a DJ - with technology being what it is now, developing a live show is easier than ever.

"To me personally, DJing is really important, even just as a recreation at home. During the busy seasons it takes up a whole lot of time and affects my desire to get into the studio, however, so it's important for me to strike a balance and make time to create the vehicle that got me the booking in the first place: the music."

Has your job changed much since you started out?

"When I first started getting paid, it wasn't really about Sabre. It was more about sound design and making jingles and music to order - occupying myself with any sound-related job.

"I'm lucky that for a few years after that I was able to exist entirely as an artist and didn't need to do any TV or radio work, but the state of record sales is unrecognisable compared to when I first started putting out music, and it's made that position unrealistic.

"I think many people's response to the new situation has been to actively pursue live work. Every year there are plenty of new 'reluctant showmen' who come into any scene, and no doubt they're mostly sincere performers, but does it come naturally to them? On a positive note, it's becoming far more satisfying as an occupation because electronic arts now enjoy a higher level of regard among the arts establishment. The snobbery has faded a lot."

Is the job rewarding, both financially and in terms of being interesting and challenging? Can you see yourself doing this indefinitely?

"The job is unimaginably satisfying on a cerebral level - I get to engage with culture and art from a perspective and with an intimacy that an outsider will never experience.

"I would say it's a bit of a worry seeing the music industries' business models enter limbo and cast a shadow on the future, but it doesn't take the shine off the here and now, where the technology keeps me challenged and inspirational new styles of music keep me motivated and inspired to progress and achieve.

"I can't imagine doing this forever, in part because I envisage a future where being a live performer dominates the agenda - but, as the saying goes, never say never!"

Dream of a career as an electronic artist? Get the brand-new Computer Music Special: How To Make It In Music, out now, to find out how to make it a reality.