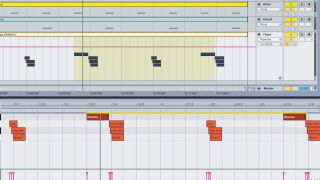 Turning off your quantise function and pulling back your claps is a great way to give your rhythm groove a lovely 'thwack' or 'splat'.

Selecting the right layers is key, as some claps' waveforms already contain a slight 'lead-in' to the main transient. Stack two or three of these, then experiment with their start times to craft a suitable 'whip' into the downbeat.

Although we've shifted our MIDI by hand in this example, most DAWs have a track delay parameter to allow instant micro-shifting of your snare and clap channels.

Step 1: Here's a standard two-bar house rhythm track at 120 BPM that we've put together in Ableton Live. The kickdrum is placed on the 4/4 downbeats, the hi-hat sits inbetween on the offbeat, and a reverbed jazz stab gives a garage vibe to the track - a solid foundation.

Step 2: Three different samples are layered to craft a full clap: consisting of a snappy snare, a short mono clap and a wider clap. Whilst providing enough weight and depth, the three sounds' transients are all colliding directly over beats 2 and 4, and could definitely be improved.

Step 3: In the clap layers' piano roll, quantisation is turned off and each sample is shifted slightly before its downbeat by a few milliseconds. Some are moved a little more than others to give a more natural timing, creating a subtle 'snap' before the kickdrum.

Step 4: Each sample's placement and length is moved even further off the grid by holding Cmd (or Ctrl on PC) whilst dragging. The first and third wide claps are shortened so most of its width is heard only on beats two and four of the bar.

Step 5: To really polish off this grooving effect, a new clap sample with a longer decay is reversed and placed before the second and fourth claps. This 'whip' - combined with some even finer timing irregularities - gives a familiar crunching effect heard all over many modern productions.

Step 6: This shifting technique relies heavily on the precise tweaking of very subtle timing differences across the different layers. To illustrate this, we've taken the claps' delay shifts a touch too far. You can hear the point at which this effect falls apart - only a few extra samples' difference.