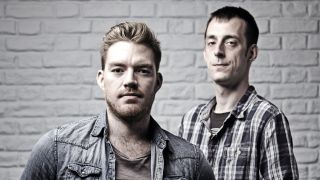 Chromatic: "Drawing in automation with the mouse is tedious, and sounds a lot less natural than recording parameter movements by hand"

Drum 'n' bass production duo Chromatic (aka Leon Bailey and Joe Rossitter) have more than proven their sound design skills with releases on a range of labels including Innerground, Playaz, Commercial Suicide, Fokuz and Utopia Music, plus gigs at Fabric, Detonate and various venues outside the UK. We invited Leon to bring his portable setup into the studio for a hands-on hoover session with the Access Virus TI.

What made you decide to recreate the iconic 'hoover' sound for this tutorial?

LB: "DnB has always been about signature rave stabs and bass samples. Who doesn't love a rumbling Reese or menacing Mentasm over a meaty sound system? A lot of producers sample these sounds, which is great, but we also love to make our own from scratch. Doing things this way is great for putting a modern spin on classic sounds, and allows us to sculpt them carefully to fit the track in question."

How important are hardware synths like the Virus TI for this sort of thing?

JR: "The Virus sounds incredible, but it's more about the hands-on approach you get from punching record and printing your filter sweeps, envelope tweaks and delay changes to audio in real time - a workflow that can be achieved just as easily with a basic MIDI controller. Drawing in automation with the mouse is tedious, and sounds a lot less natural than recording parameter movements by hand.

"Once our tweaks are printed to audio, we like to sift through and chop out the best sections, bouncing them into a new folder for later use. Delay tails and 'offcuts' from a stab-making session can quite easily become useful sweeps and rise FX in their own right. "

Step 1: Let's look at how Chromatic make a rave stab from scratch. Leon's using his Access Virus TI, but you can achieve very similar results using all manner of synths, including NI Massive and Lennar DigitalSylenth1. Leon starts by loading a new instrument track with a fresh instance of VirusControl (the TI's plugin editor), drawing in a few MIDI regions to trigger the synth, and looping playback.

Step 2: He sets the project tempo to 170bpm to ensure that any time-based effects are at roughly the right speed for DnB. In VirusControl, he sets Oscillators 1 and 2 to the Hypersaw wave, stacking multiple sawtooth waves for a rich, detuned sound. Oscillator 1's Detune is set to 100 and Oscillator 2's to 110, before Oscillator 1 is pitched up an octave to add bite.

Step 3: After adjusting the Oscillator 1/2 Balance to blend the high end in, Leon sets Oscillator 3 to a sawtooth wave, tunes it down an octave and mixes it in subtly to add some depth without making the low end overly dominant. He then uses the Unison controls to detune all three Oscillators further and add a little stereo width, making the stab more interesting.

Step 4: To grunge the stab up a little, some hard Distortion is brought in with the Mix set to around 12 o'clock, plus a touch of reverb and delay for further width and depth. The sends for these last two are set to around -20db, while the delay is set to Tape Doppler mode with the Time at 278ms, and the reverb is set to Ambience Mode with a short Decay time.

Step 5: Next, in the TI's modulation matrix Leon assigns an LFO to the Distortion Mix and Oscillator Balance, set to a sine wave with timing, adding some much needed movement to the sound. After this, a pitch envelope is used to recreate the feel of a classic 'Dominator' hoover: Envelope 3 assigned to the Pitch for Oscillators 1, 2 and 3 with the Amount slider set to +7.

Step 6: To make the pitch rise and fall, Leon opens the Filter tab and pushes the Envelope 3 Attack and Release times up. He also applies the Bit Reducer effect to thicken the sound further. The Reverb Time, Color and Send are then assigned to one of the synth's soft knobs via the mod matrix, and the Filter 2 Cutoff, Amp Envelope Release time and Delay Coloration are assigned to another.

Step 7: Having routed the Virus TI's output to an audio channel in his DAW, Leon records several variations of the stab as audio in real time, while tweaking the soft knobs set up earlier on and adjusting the delay Time. This enables him to easily but dramatically change the feel of the stab using only a few controls, and provides plenty of variations to cut up and use later.

Step 8: To finish, Leon inserts NI's Passive EQ, applying a high-pass filter at 68Hz, a low-pass filter at 18kHz and a high shelf boost at 1kHz. This adds character and upper mid-range bite, with the low-pass filter's resonant peak giving a little sparkle to the high frequencies. A touch of limiting using Voxengo's Elephant takes some of the initial attack from the stab and boosts the overall gain by around 8dB.

Hoover stabs with the Virus TI