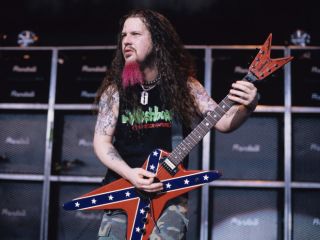 The video for 'new' Pantera song, 'Piss', a previously unreleased track made public to promote the reissue of 'Vulgar Display Of Power', is now online and you can watch it right here.

The song, which was recorded around the same time as the band's landmark album 'Vulgar Display Of Power', features some killer licks from departed riff lord Dimebag Darrell, so we're a bit baffled as to why it's taken so long to surface.

According to Vinnie Paul, 'Piss' is a one-off, both in terms of completeness and quality.

"'Piss' is the only unheard complete Pantera track in existence," the drummer told press. "It was recorded at the same time as 'Vulgar Display Of Power' and it's 100 per cent Pantera with attitude and our signature groove! After mixing it, I can't believe it didn't make the record! So it's 2012 and 20 years later and new Pantera music has been delivered."

The video was made by long-time Pantera fan Zach Merck, who invited fans to submit their own audition tapes of their, err, dancing, before he picked the best to come along for the final shoot.

Check out the track above and then let us know what you think via Facebook and Twitter.