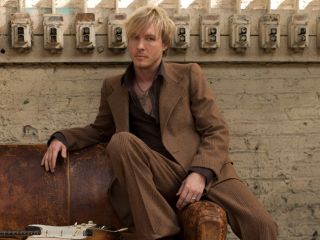 Check out the video above to watch talented self-taught bluesman Kenny Wayne Shepherd telling the story behind his go-to guitar, a 1961 Fender Strat.

Kenny released his sixth album, 'How I Go', back in August and has very kindly put together a short series of videos for Total Guitar, the first instalment of which you can watch above.

Shepherd originally shot to fame when he released his debut album 'Ledbetter Heights' when he was just 17. He's since gone on to release three platinum records (and a gold one), marry Mel Gibson's daughter (with whom he has three children) and jam with B.B. King.

TG thinks he's very brave to carry on playing in the face of such adversity. Not that we envy his guitars, money and critical success. Oh no, not at all…

If you feel inspired to brush up on your own licks, check out our 'Essentials: Blues scale riffs' video lesson.

You can also watch the official video for single 'Never Looking Back' below and catch Kenny live when he plays a one-off date at London's Koko next week (7 November. Head to www.ticketweb.co.uk to get your tickets.