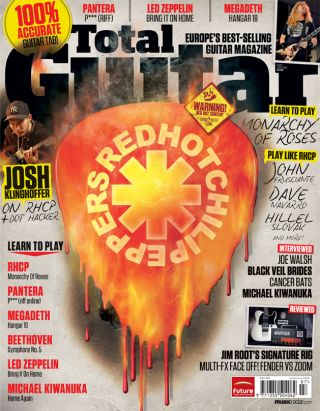 The new issue of Total Guitar is on sale nationwide (and, digitally, around the world) from today. This issue, we speak to Red Hot Chili Peppers guitarist Josh Klinghoffer about his career, gear and what it's really like playing guitar in one of the biggest bands in the world.

'Board Basics
We show you how to put together your first pedalboard, including how to power it, the order to put your pedals in and why using Blu-Tack on your stompboxes is a bad idea!

Black Veil Brides
Make-up? Mousse? Massive solos! We find out if BVB are for real

Tesseract
Can modelling replace valve amps? Tesseract tell us why they think it can

Full tabs, backing tracks, the story behind the songs and a guide to getting the tones for…

Led Zeppelin 'Bring It On Home'

Over 15 pages of gear news, reviews and advice. Reviewed this issue...