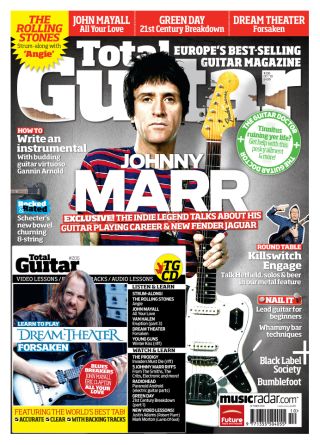 Issue 206 of Total Guitar magazine is on store-shelves nationwide and it's a corker, featuring the inimitable Johnny Marr on the cover.

Johnny Marr
The indie legend gives us a guitar-playing career retrospective - from The Smiths to The Cribs - and explains the key points behind his new signature Fender Jaguar.

Black Label Society
Zakk Wylde walks us through his new album, 'Order Of The Black', track-by-track and points out the key techniques and effects on each song.

The Guitar Doctor
TG lifts the lid on the five health threats that every guitarist faces and seeks the expert advice that you need to beat them!

Bumblefoot
Ron Thal revisits his phenomenal debut album 'The Adventures Of Bumblefoot' and the trickbag of techniques it contains.

How To Write An Instrumental
Taylor Hawkins' lead guitar Gannin Arnold explains how to write one, who to work with and how to market yourself.

Win a guitar signed by Slash!
We grabbed a bunch of our favourite guitarists (including Slash!) at this year's Download festival and forced them at pick-point to sign our Peavey Jack Daniel's guitar. Now we're giving you a chance to win it in our TG206 competition!

TG206 Audio: Schecter Damien Elite 8
Hear Schecter's affordable eight-string being put through its paces and check out the full review in this months Rocked & Rated section.

TG206 Audio: Epiphone Emperor Swingster
Epiphone go rockabilly? Now this you HAVE to hear. Fortunately you can… Then read the review in TG206.