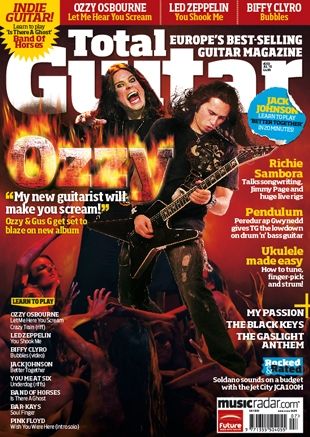 The new issue of Total Guitar, TG203, is on sale now. Featuring an exclusive interview with Ozzy Osbourne and his new guitar prodigy, Gus G.

Not to mention interviews with the Gaslight Anthem, Bon Jovi's Richie Sambora, The Black Keys and Pendulum.

We've also got the full tab of new Ozzy track 'Let Me Hear You Scream', the first to feature Gus G, 'Crazy Train' as our riff of the month and 'in the style of' Randy Rhoads, Zakk Wylde and Gus G licks.

- Pendulum - They just hit number one with new album 'Immersion', we spoke to guitarist Peredur ap Gwynedd to find out how to play guitar in a dance band.

- The Gaslight Anthem - Guitarists Brian Fallon and Alex Rosamilia explain how they tore apart their guitar playing in the 'American Slang' sessions. (Check out our Gaslight Anthem blog in which Alex picks his top 5 guitarists).

- The Black Keys - Always an entertaining read, Dan Auerbach explains how sometimes putting the guitar down can make you a better player.

- My Passion - Guitarist John Be gives us a track by track run-through of the new album 'Inside This Machine'.

- FULL TABS for Ozzy Osbourne 'Let Me Hear You Scream', Jack Johnson 'Better Together', Led Zeppelin 'You Shook Me', Band Of Horses 'Is There A Ghost' AND Bar-Kays 'Soul Finger'.

- Video lessons on Pink Floyd 'Wish You Were Here', Biffy Clyro 'Bubbles' and five killer pop solos (including 'Beat It', 'La Bamba' and 'The One And Only'), as well as more lessons from Zakk Wylde, Tommy Emmanuel and Joe Bonamassa.

We've got some amazing gear (within reasonable price ranges) in this issue, including…

- A review of the Indie Shape Doublecut Semi-Hollow guitar.

- A review of the Pro Co Reissue '85 Whiteface RAT distortion pedal. Is the reissue up to the legendary original?

On top of all of that, Ed's Shed explains just how a Floyd Rose vibrato actually works, the latest reviews of the albums causing a stir in TG towers, our Those About To Rock new bands and the best guitar-related gear and music news.