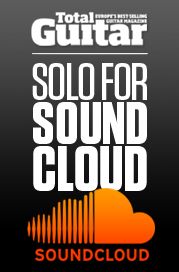 After much deliberation TG is pleased to announce the winners of our Solo For Soundcloud competition, as judged by Jim Davies (Pitchshifter/Prodigy/Victory Pill). Scroll down to stream our favourites.

We challenged you to record your best solo over our classic rock backing track and send it over via our SoundCloud dropbox. We had some very strong entries (and some that were just taking the Michael), but with the keen ears of Jim Davies at our disposal the list was whittled down to the four finalists below.

Firstly, our three runners-ups, who have all won a year's SoundCloud Lite account after they put together the following excellent solos.

Peter_41324 (Peter hasn't actually got back to us yet - check your SoundCloud inbox!)

And without further ado, our Grand Prize winner is Josh Guyan, who is due to be the proud recipient of £600 worth of Ernie Ball goodies and a one year SoundCloud Pro account.

Here's what Jim Davies had to say about Josh's solo:

"What really caught my ear was Josh's use of the harmonizer effect half way in. Rather than sticking to a traditional blues based solo, he thought outside the box and used the more interesting harmonic minor scales, which worked really well.

"I also liked the way he layered his playing, which created a really unique and creative solo while remaining very melodic and tasteful - excellent use of effects. I've always been a big advocate of layering your solos to make them as interesting and original as possible, which is exactly what Josh did.

"Overall a very well thought out solo, especially considering the short length of the backing track. Many of the entries played it very safe and stuck to traditional blues rock style playing, but Josh is obviously a guitar player who thinks outside the box, and that gets my vote very time!"

Thanks to SoundCloud, Ernie Ball and everyone who entered the competition. Also, be sure to check out the Competitions tab for our latest contests.