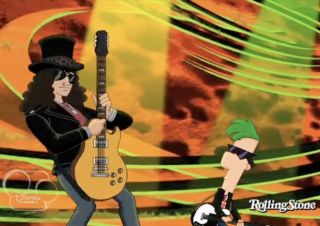 Top-hatted, chain-smoking, sun-bespectacled guitar wizard Slash has announced that he is due to appear in animated form in the forthcoming cartoon 'Phineas And Ferb The Movie: Across The 2nd Dimension' and that he's recorded a song for the soundtrack.

It was only a matter of time. You've already made one of the greatest rock albums of all time, followed it up with a successful and varied solo career, as well as releasing a string of your own signature guitars and amps, so where does the discerning rock star go from there? The Disney Channel, of course!

Yeup, Slash has confirmed that he will be appearing in the forthcoming 'Phineas And Ferb' feature film, which is scheduled to premiere on the Disney Channel in the US on 5 August. The guitarist, or at least his animated self, will be performing a song written especially for the film.

Slash told press that the animation is a "guilty pleasure" and "very rock 'n' roll, even for a cartoon". So far there are a smattering of teasers to be found around the internet, including the YouTube video embedded below, and a more revealing snippet on RollingStone.com.

There will also be a full DVD release, again in the US, on 23 August. There is so far no word on whether or not the film will make it across the pond to the UK.

What do you think about Slash's latest career move? Is it just a bit of fun, or so bad that he should have steered well clear? Vote on the Total Guitar Facebook page!

Video: Slash in 'Phineas And Ferb The Movie: Across The 2nd Dimension'