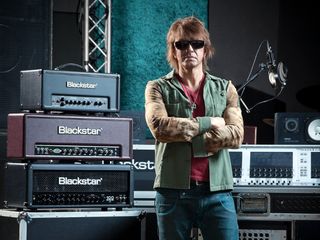 The guys at Blackstar must have done a little dance when they got this news: Bon Jovi guitarist Richie Sambora has signed up to a worldwide endorsement deal with the Northampton-based amp-maker.

Sambora is best known for selling roughly 130 million records, for his signature Talk Box-enabled 'who-woah-woh' on 'Livin' On A Prayer', and also for his ridiculously good guitar collection.

The guitarist is currently working on a new solo album (his third to date) and a new Bon Jovi record is also in the pipeline.

"With 2012 marking our fifth anniversary it's great to see such a diverse range of guitarists choosing Blackstar. It shows how Blackstar amps cater for up-and-coming bands all the way through to legends such as Richie".