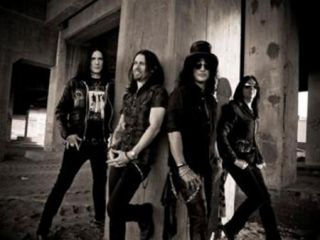 The second solo album from Slash is due out on 22 May in the UK and, as was the case with his previous record, will be released exclusively in 'fan pack' format via our sister magazine Classic Rock.

The new Slash Fan Pack will include a magazine dedicated to the guitarist (featuring behind-the-scenes photos), bonus album tracks, a pin badge and a poster of the album artwork and will be available nationwide via newsagents, music retailers and online channels.

There is also the matter of the aforementioned snazzy video trailer for the release, which you can check out above.

We spoke to Slash during the recording sessions for Total Guitar issue 223 and found out about new songs 'Bad Rain', 'Standing In The Sun' and 'Halo'.

Click here to pre-order the Slash Fan Pack, available May 22.