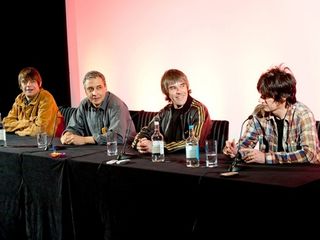 The Stone Roses yesterday announced to the world that they have reformed and will make their live debut next summer. More importantly, though, this means that John Squire is playing the guitar again.

Of course, the reunited band didn't get far into the press conference before someone asked about Squire's much-quoted statement/sculpture in 2009, which read: "I have no desire whatsoever to desecrate the grave of seminal Manchester group The Stone Roses."

"Everything changed when me and Ian started seeing each other again," Squire told press.

"It was just surreal - we went from crying and laughing about the old days to writing songs in a heartbeat.

"I think, in some ways, it's a friendship that defines us both and it needed to be fixed. Two phone calls later the band is no longer dead. There is no grave."

In the meantime, The Stones Roses are faced with the not inconsiderable task of getting match fit in time for their return.

"We've not played much yet, we've been circling around each other for a while and it's like joining a new band, with ghostly kind of presences," said the guitarist, before later adding.

"We've rehearsed, we've written songs and in some ways it seems like 15 years ago was yesterday. It's quite strange."

The Stone Roses will make their live return with two shows at the 75,000 capacity Heaton Park stadium in Manchester on 29 and 30 June 2012. Tickets go on sale 9.30am Friday 21 October through ticketmaster.co.uk, gigsandtours.com and ticketline.co.uk.

So there. TG will thank all detractors to just keep their big mouths shut right now. We've got what we want and we'll damned if anyone's going to mess it up for us before we get to witness 'I Am The Resurrection' belted out in the live arena.