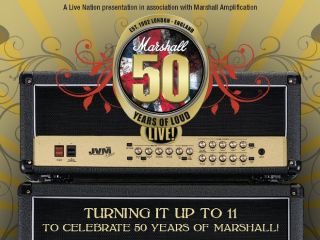 Among those set to appear at the showwill be some of the biggest names in guitar land, including Joe Satriani, Paul Gilbert, Yngwie Malmsteen and Zakk Wylde, alongside a stellar line-up of Billy Duffy (The Cult), Nicko McBrain (Iron Maiden), Corey Taylor (Slipknot), Doug Aldrich and Brian Tichy (Whitesnake).

There are more names still to be announced and it's being supported by your favourite guitar mag (that's us, in case you didn't know) and this here web-behemoth, MusicRadar.

"Artists play a massive role in the company, and are very much part of the 'Marshall Family'. Over the five decades of Marshall's history, practically every guitar hero has used Marshall, Richie Blackmore, Jeff Beck, Gary Moore, Slash, the list goes on…. This event is a celebration of the Marshall family and we are honoured so many artists want to get involved!"

Tickets for the event will go sale this Friday (9 March) at 9am from www.livenation.co.uk. Set your alarms, put an annoying reminder on your phone, or tattoo it on your forehead - just DO NOT miss this gig!