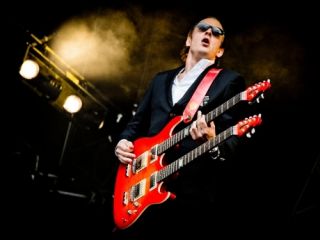 Joe Bonamassa is undoubtedly most famous for his killer blues rock soloing, but he's also a master of heavy, grooving riffs as the title track from 2009's 'The Ballad of John Henry' proves. Interview: James Uings.

How do you feel about 'The Ballad Of John Henry' coming 12th in Total Guitar's 50 Greatest Riffs Of The Decade poll?

"Did it? That's so cool, it really is! I've never been known as a riff kind of artist. My most notable songs aren't riff-orientated; in fact, 'John Henry' is probably the only one that is."

Are you surprised you beat out riff heavy acts like AC/DC and Metallica?

"I'm really shocked I made the list. There does seem to be a new generation of blues guys younger than me coming through. They seem to be making a career out of it. So it's good to see young kids getting into the blues."

How did the song come about?

"It was written in about an hour. I needed something upbeat and heavy to open the record. We also didn't have a title track, so I was really under the gun!"

What do remember about writing the riff?

"When I write for an album, I'll always have about 30 different types of instrument around me. I set them up in a small room with my computer running GarageBand, which is always set to record. I have a Marshall and a Fender amp: one for clean, one for dirty. Then whatever I feel like plugging into I can plug into right away. I'd just got involved with Musicman guitars and they'd just sent me over a few different baritone guitars. One was a six-string bass, which I used on another track, and the other one was a John Petrucci baritone guitar. When you think of a blues guitarist you don't think of them using a Petrucci model, but I plugged it in and started playing a few notes and thought, 'That's pretty cool'. I started singing along and made up a few lines over it. After about five minutes I listened back to what I'd recorded. It wasn't like a 'divine intervention' thing, where the whole track wrote itself, but I'd say three quarters of it was there in this 'off the top of my head, ramblings of a madman' demo!"

The track has a real Zeppelin-style groove to it. Did that come naturally or is it something you worked on later?

"It came about because of the way I wrote the riff. The demos I record are the crudest thing possible - just me and a guitar - so there's no groove when I write them. When it came to put a feel to it just naturally lent itself to that Zeppelin-y thing and, of course, there's that sort of reverse 'Kashmir' bridge as well. What are you gonna do? I ain't the first and I won't be the last! Actually, Jason Bonham commented on that, but I said, 'Hey, at least I didn't steal ALL of it'."

Did you tweak the song after those early sessions?

"Not in the studio, but we did re-work it because we got bored of playing it like it was. We've played it the same way for two years. I was just messing around with it on a regular guitar rather than the baritone and it sounded great. It just seems to have more urgency. We moved the key up from C to E, so we do it in standard tuning all the time now. I had to change the vocal as well, but it's better and now I think it sounds more Hendrix-y. It also saves us taking the baritone guitar to shows just for a single song. We've played it in E at three shows now and I don't think anyone's noticed to be honest!"

What makes a great riff for you?

"A great riff is something that hits you right away. There are a few of songs I think really do that. 'Just Got Paid' by ZZ Top is a fantastic riff, so is 'Heartbreaker' by Led Zeppelin. Another great riff is 'I'm A Mover' by Free and, obviously, anything by Sabbath. Immediately you're drawn to them, you don't know anything about the song yet, but it pulls you in. It gives you a sense of anticipation about what's to come. If you have a good riff with a vocal as well then it becomes a devastating song. That's why people love riff-rock: it's the ultimate air guitar music."

How do you keep your writing fresh?

"You have to listen to a lot of music. People are shocked when they find out what I listen to on my iPod. It's not all blues or blues rock. I listen to everything from John Legend to metal. I find little bits and pieces that inspire me from lots of different kinds of music whether that be Iron Maiden or something else. If you leave your mind open it just kind of seeps into you."

Can you give us some examples?

"When you go to write something in your own genre, all that stuff you listen to just comes out. You might write a riff using a lot of semitones that moves you into more Indian-sounding scales, or you might base an idea on an Al Green, R&B type of chord progression. All that stuff kinda works when you use it in the context of blues rock because it sounds fresh. Most blues people don't take stuff from those influences."

What are your Top 5 blues riffs?

"The best song ever 'has' to be 'Born Under A Bad Sign' [Albert King]. It's just fantastic - I think it's devastating from the first note. 'I Ain't Superstitious' by Howlin' Wolf; I like the Jeff Beck version, too. 'The Thrill is Gone' [popularised by BB King] is an obvious choice. 'Boogie Chillen' by John Lee Hooker and how can you not have 'I'm A Man' by Bo Diddley?"