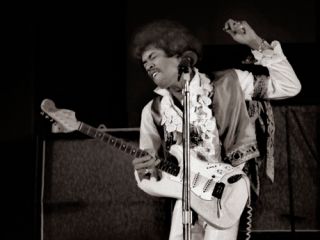 Janie Hendrix, sister of Jimi and CEO of Experience Hendrix, has announced a new documentary about the guitarist's 1969 gigs at London's Royal Albert Hall.

Hendrix (the sister) told Billboard that the film portrays "a day in the life of Jimi" and reckons it will offer a level of 'backstage' access that Hendrix fans won't have seen before.

"There were about four cameras that followed Jimi and the guys around in Europe and filmed the two concerts at the Royal Albert Hall," revealed Hendrix. "As well as them coming off trains, planes and automobiles, signing autographs, Jimi backstage getting ready, in his apartment doing little apartment jams with his friends and then later playing the Speakeasy."

"It's not an actor playing Jimi, it's Jimi and he really does forget the cameras are rolling. You see those sides of him, the stage and the sweetness with different girlfriends - there's several that are in the film - and how he was around friends and how he was really into listening to the [tape of] the night before's performance."

Hendrix plans to release the film in cinemas, on DVD and pay-per-view TV. Keep an eye on TG for news of UK release dates.