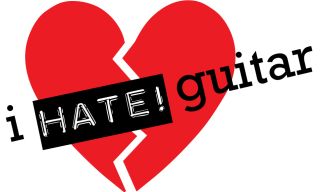 In the first of a series of guest blogs, I Heart Guitar's Peter Hodgson vents as he explores the common reactions towards seven-string players.

The Plight Of The Seven-Stringer

Today I went to a music store to pick up a few sets of strings for a pair of my babies (an Ibanez Universe and a Buddy Blaze Sevenator prototype).

I spent about three or four minutes of straining my eyes to see the string sets far away on the other side of the counter before the clerk looked up from the back of the store, where he was practicing some blues licks. "What ya after, mate?" he said, in a put-out, 'You just ruined my practice session' tone.

"I'm after some seven-string sets," I offered with both hope and charm, carefully calculated to mask my dislike of the particular music stores on my side of town.

Oh no, that wasn't it either. What was it? Oh yes…

Yeah. That was it.

As a seven-string guitarist, I've heard it all:

"Seven strings? I have enough trouble with six!"

"Oh you don't play that nu metal crap do you?"

I generally just smile, nod and mentally assign my assailant to the Sarlaac before responding with something like, "Jimi was an eternal sonic explorer - I'm sure he would have loved a seven-stringer if he lived long enough to get his hands on one," or "Well David Bowie played Space Oddity with twelve strings, and that was in the 60s," or "Nah, I'm forging a new genre called Olde Metal. Instead of nose rings and wallet chains we wear monocles and driving gloves."

But that doesn't really get me anywhere, other than making the other participant in the conversation cast their eyes around in search of an exit, a truncheon or both.

We seven-stringers are an oppressed breed. There are lots of us out there: just look at the catalogs or websites of brands like Ibanez, Schecter, Jackson, ESP and Mayones to see how heavily these companies are investing in axes for seven-string players.

Or pickup manufacturers like Seymour Duncan, Bare Knuckle, EMG and DiMarzio, each of whom offer a wealth of options for those who wish to plumb the sonic depths while also soaring into the clarion highs. And there are literally quintillions of bands using seven and even eight-string guitars. Yet to a certain very large proportion of the guitar-playing population, we're looked at with scorn.

I think a lot of the damage was done in the late 90s by that era's breed of nu-metallers - not Korn, who did some pretty innovative things with the instrument across its full range, but by their imitators, most of whom wasted the seven-string by dwelling only on the low B, ignoring the wealth of complex chords, extended arpeggios and enhanced scalar reach that a seven-string can offer, when it's in the right hands.

I'm a big fan of 'traditional' electric guitar. I own and play the hell out of a Tele, a Strat and a Les Paul, and each of them is purposely selected to represent a vintage approach to these instruments, rather than a more modern, ergonomic super-axe that happens to be shaped like something from the 50s.

If you're going to play a Strat, play one that puts up a fight like a belligerent drunk and buzzes like a beehive if you get too close to a halogen bulb. But in its day even the Stratocaster was an exotic, alien instrument, just as the seven-string appears to some players now.

When you think about it, we're all playing an assemblage of wood, wires and magnets that we strap to our bodies and make unnatural noises with, so why should anyone be so shocked by my open D chord with a bass note a whole tone lower than that of an open E chord on a regular guitar?

If I happen to hear a riff in my head that includes an Eb or a low C, isn't it my right to crank up my amp and terrorise my neighbours with it til the 'For Sale' signs spring up like mushrooms after a drizzle?
I mean, it's not like I'm just chumping around in Drop D.