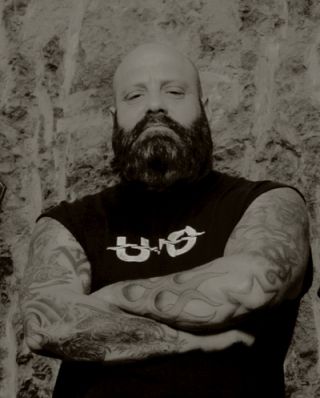 Down and Crowbar riff machine Kirk Windstein is a Thin Lizzy fanatic. So with our Lizzy cover feature in issue 217 now on sale, we wanted to get his thoughts on why their legacy is still so important in rock…

"I'm a Gary Moore fan but I particuIarly love the 'Jailbreak' era of the band - Robbo and Gorham, the twin guitars. Scott Gorham looked like the coolest looking guy ever. My wife calls him the original Mr Pretty Hair! Even I've got to say he looked good, and I'm a dude - a straight guy!

"Brian Downey is very underrated as a drummer too, but Lizzy for me were about the emotion in the songs as well. Phil Lynott was the best lyricist, when I listen to his lyrics it's like he's telling a story and I can picture it in my mind. Some of them almost bring me to tears because you can hear so much of his struggles with alcohol and drugs. A song like 'Got To Give It Up' [from 1979's recently reissued 'Black Rose' album] - I have demo versions of that song and the lyrics are even harder. The record company apparently had him lighten it up a little. It's emotional - and to me that's what music is about. That's what's heavy.

"I just bought some of the remastered albums that Scott Gorham did with [Def Leppard's] Joe Elliot. I was listening to them in the car with my little car and it's just incredible. It's bluesy, it's rock, it's got heavy moments, great musicianship and the emotion from the songs is just unbelievable."

Total Guitar issue 217 with a special Thin Lizzy feature is on sale now. Down will begin recording the first of four planned EPs of new material in August.