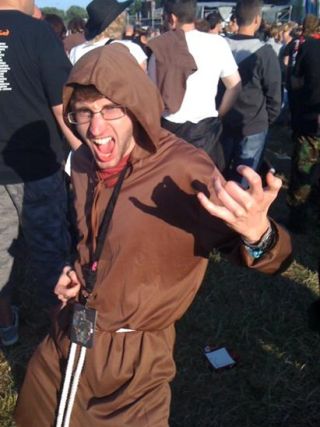 This year's Download festival kicked off properly yesterday (12 June), with sets from AC/DC, Them Crooked Vultures and Killswitch Engage.

TG's first band of the festival was Year Long Disaster on the Pepsi Max Stage. Despite having no formal guitar training - frontman Daniel Davies later told us he learnt "by ear and a book of chords" - the group had no trouble pulling deceptively simple Page-esque riffs out of the bag and distributing them liberally, like some kind of guitar-ing Milky Bar kid. Davies has the same approach to his solo-writing, crafting emotive lead lines, that don't prove too taxing on the fingers.

Following YLD (and various interviews and photo-shoots), TG managed to venture out of the press enclosure to catch Killswitch Engage tearing up the mainstage. The guys know what they're doing by now and delivered a set worthy of the event. Closing with their cover of Dio's 'Holy Diver', it gave Donnington a chance to say a proper farewell to RJD.

Them Crooked Vultures also made an admirable effort, their combined heritage ensuring an audience of all ages turned out - a canny pre-AC/DC booking on the part of the Download organisers. However, as capable as TCV are of handling festival crowds their set lacked a certain punch and felt to TG like a band going through the motions - the extended jams were particularly laboured.

Touring guitarist/contributor Alain Johannes is worth a mention though, providing some nice colouration with slide guitar licks on a variety of customised instruments, including a Fender Jaguar with P90s and a slide guitar with a built in Kaos pad. Hugh Manson (the man who makes Matt Bellamy's guitars) is also John Paul Jones' bass-tech, so we think we know where that one came from...

The evening was then left in the very capable (and somehow un-arthritic) hands of Angus Young and AC/DC. The group (though probably unaware of it) had a huge weight of expectation on their shoulders. Having been booked for a rumoured £4 million, bringing the band to Donnington meant a smaller amount of bands could play on the Friday and that the organisers had to allow them to erect their own stage - which was the same size as the main one, and more heavily loaded.

Fortunately they didn't disappoint and delivered a set full of classics, including 'Whole Lotta Rosie' (complete with a gigantic inflatable Rosie figure), 'You Shook Me All Night Long', 'Highway To Hell', 'Those About To Rock (We Salute You)' and 'Back In Black', to name a few. Insanely tight and surprisingly energetic, we'd be very surprised if anyone of the audience felt it wasn't worth the sacrifices.

That's it for today, but keep an eye on our Twitter for more frequent updates and pictures of costumed tom-foolery.