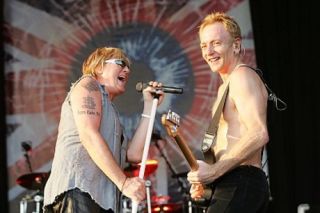 Def Leppard's ode to empty calories, 'Pour Some Sugar On Me', is a monster riff and strippers' favourite. Guitarist Phil Collen talks about the track he describes as a bit 'oo-er missus!' and reveals his all-time favourite guitar riffs.

One lump or two?

TG: How did 'Pour Some Sugar On Me' come about?

"[Def Leppard frontman] Joe Elliot was sitting in a corridor playing acoustic guitar and singing 'pour some sugar on me', and our producer Mutt Lange was like 'what's that?'. 10 days later we had the whole thing written and recorded. It was the last song we recorded for the 'Hysteria' album [1987]."

TG: The song actually has two monster riffs, the intro and the verse...

"Yeah. Mutt came in with this country thing that became the intro riff. He played it with his fingers. I can't really do that so I picked it. I used a metal pick and it sounded different. Then we needed the rest of the verse so I came up with that big rock riff."

TG: Bet you can't remember what gear you used to record the song?

"I can actually! The whole album was pretty much done on a Tom Scholz Rockman, the little headphone amp. We ran a cable from the headphone socket to the mixing desk. The intro riff was played on my silver and black crackle Jackson. I did two tracks with that and then over-dubbed with a Fender Telecaster. The rest of the song was played on 'Felix', my black 1978 Fender Strat that was fitted with a humbucker from my original Ibanez Destroyer."

TG: What is it about 'Pour Some Sugar On Me' that made it so popular?

"It's a bit oo-er missus! Even now when we play it live it brings out the inner stripper in all these 50 year old women in the audience!"

TG: What other Leppard riffs are you particularly proud of?

"'Promises' ('Euphoria', 1999) was really cool. We thought 'wouldn't it be great if we had a song that was a bit like 'Photograph' ['Pyromania' 1983] and 'Armageddon It' ['Hysteria', 1987]?' These riffs, they just come out of nowhere. Sometimes you'll be sitting on the toilet or something and think 'hang on a minute, I've got this idea!' 'Promises' was one of them. I don't think I was on the toilet though!"

TG: What do you think makes a monster riff?

"Simplicity is important. A riff has to be memorable but you have to keep out of the way of the vocal. Guitar parts have to be either rhythmic or melodic. If a riff is too complicated or it's in some weird time signature, 90 per cent of your audience are going to turn off. Also, a monster riff has to be played right. You have to give it some stick. You've got to mean it."

TG: How does the writing for Def Leppard and Man Raze differ?

"In Man-Raze I just write what I'm feeling. Lyrically, I can get a bit deep, cryptic, even political. There's reggae, punk and rock stuff in there too. People ask me why I need to do another band. It's because I couldn't do that stuff in Def Leppard where I'm playing to a different audience. I have to write a certain kind of song for them."

What are your favourite monster riffs by other bands?

"'Back in Black', 'Highway To Hell'... I love the AC/DC stuff. They're riffs you never get bored of. 'Welcome To The Jungle' by Guns N' Roses is pretty cool. 'Walk This Way' by Aerosmith is a great riff. Some of the Stones stuff, too. You hear the first three chords of 'Start Me Up' and it has an effect on you. Of course, the grandaddy of monster riffs is 'Smoke On The Water'. Although when I first learned that riff I played it wrong!"