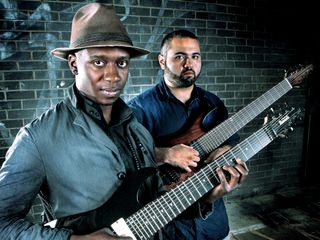 Tosin Abasi, frontman and lead guitarist of genre-blurring progressive metallers Animals As Leaders, kindly took time out of his busy schedule of melting faces to talk us through his Axe-FX II rig.

Tosin's one of the most interesting guitarists we've heard in a long time and you can read our full interview with him in Total Guitar issue 223 (on sale 28 December to 22 January).

However, Tosin's not just innovating with his playing - he's also one of an ever-growing group of players championing Fractal's Axe-FX II simulator, which seems to be rapidly becoming an industry standard.

If you're a fan of detailed, considered explanations of pro-level gear set-ups then strap-in - it's your lucky day.

Everyone else should probably go and look at these pictures of Boo, the world's cutest dog. LOOK AT HIS TINY FACE!

You used Fractal's Axe-FX unit to record the new album 'Weightless' and now live. How did you discover it?

"I have an Axe-FX II and Javier has an Axe-FX Ultra. Misha [Mansoor of Periphery] introduced me to Axe-FX. I had a pretty extravagant rig - an Engl head, Orange cab and at the other end I had a VHT power amp, Line 6 PODX3 and that was going through a Genz Benz cab. And then there was the pedalboard. He has an Axe-FX and let me play through it and eventually I realised, 'I have too much gear - is this really necessary?' So I asked him, 'Do you think I can still pull off what I'm doing with all this gear with just the Axe-FX?' He said, 'Absolutely.'" It's the most streamlined setup I've ever had but it's actually the most capable too."

Do you miss having cabs behind you onstage?

"In a way, yes. But the Mackies actually have quite a range of frequency and I learned that by using the Axe-FX full range, then trying to emulate the sound of a cab. It's pretty hard to beat. I miss it in some ways. The experience of playing through a cab is almost like being directly connected to your guitar. And there are so many combinations of speakers, enclosures and woods. But I found that in a live setting it might be nice to play up against your cab but there's so many factors that dictate what it sounds like front of house; what kind of mic are you putting against the cab, is it on or off axis, how many inches away from the cone is it, what kind of grill is on the cab. Then there's stage volume. One day we made the decision to have a lot of control over our tone and then to have that tone not change at all front of house. And that's basically what the Axe-FX allows you to do."

So it's easier for the in-house sound engineers?

"Definitely - it's such a clean signal and I think it sits in the mix better overall. I think it's more articulate and a bit more present in a way that's really hard to emulate with a mic up against a speaker diaphragm. I think our tones are better - we can take a meticulous tone from a recording and with minor alterations it's something that translates live. But it sits in the mix as well. It's awesome."

Are your presets quite simple?

"One of the things I do that might be less conventional is I run two amp head models and I'll choose one that might excel with rapid bass response and tight low end, more of a modern voiced amp and then I'll take another amp that might be more organic and maybe vintage, with less gain and more mids, then blend the two together to take care of the weakness of one. It's kind of the best of both worlds. I always played with two heads and two cabs when I had a conventional setup, so it's something I've always liked to do."

What are the disadvantages of using it?

"Endlessly crafting a tone - knowing when to stop! I've sat there for hours dialling in stuff when I could have been making music and practicing. I don't know if everyone has that problem, but sometimes I get carried away."

And you use an external phrasing sampler with that?

"Yes it's called a Boomerang. It's for a third layer of guitar when we need it live. But there are also effects I can use it for - it allows you to record at half speed and then you can bring it back up to normal but it pitches up and it also doubles the speed of it. I'll do that with a multi-tap delay from the Axe-FX and it's a weird wind chime, heavenly-sounding effect and I haven't heard anyone else do it."

Looping is a skill in itself - did you find it challenging at first in a live environment?

"It's weird - it is a skill in itself. And sometimes I wish I didn't do it. Because it's one thing to perform and execute your part in time as well as not messing up while playing the phrase, and another to actually hit record on an accurate downbeat or whatever the case may be. To hit loop on the appropriate beat - not too early, not too late, all onstage… it's kind of intense. But I've been doing it six years or maybe longer and it's really become part of my style. I could figure out an alternative but for some reason I enjoy doing it. Even before I reach the stage, I use it to expand on parts I'm writing. If I have a chord progression I'll loop it then start layering over it. A lot of the songs are born from that process."

Check out Total Guitar issue 223 (on sale 28 December to 27 January) to read our full interview with Tosin Abasi.