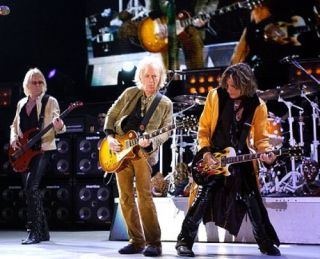 Few bands have created as many memorable riffs as Aerosmith. Joe Perry and Brad Whitford recall how two of their finest, 'Love In An Elevator' and 'Walk This Way', came about.

TG: How did you come up with the riff for 'Love In An Elevator?'

Joe Perry: "That particular riff kind of floated my way during one of mine and Steven [Tyler]'s writing sessions. I was probably listening to Jimi Hendrix on the ride up. I was talking to Rick Rubin once about writer's block and he said, 'Make a CD of all the songs that you fell in love with and made you love rock 'n' roll. Listen to that over and over again and it'll start the wheels going'. So I was listening to a lot of Hendrix, and it was one of those riffs that just played itself. I picked up the guitar and it just started coming out."

TG: At what point did you realise you had a killer riff on your hands?

Joe: "I don't know if you ever do. Sometimes when a record's done I'm satisfied and I won't listen back to it for a while 'cos I'm usually pretty tired of the songs. Then I've got to learn them again to play them live and sometimes it takes a while to realise it's a really good record. Even now I'll listen to a record and go, 'I kind of forgot about that riff, it's actually pretty good!'"

TG: Are there any particular techniques you use for playing the riff?

Brad Whitford: "To get it to sound big I use a fairly clean sound. I try to stay very faithful to the way Joe created it because he has a very unique technique that he uses, which is essentially his picking hand - so when it's played correctly it's very powerful."

TG: Did the riff change much from its conception?

Joe: "I remember it came out pretty well done! I remember this clearly because there's a video of us actually writing that song ['The Making Of Pump'] and it was one of those days when we were really on the ball, the video tape was running and it captured the moment."

TG: How do you keep your guitars sounding distinct from each other when you're playing the same riff?

Brad: "A lot of the time I make sure that we're not using the same guitars to broaden the scope of the guitar sound, and a lot of times we'll play very similar or exactly the same riff - sort of old-school power with two players playing the same thing, and the bass. And then we'll do very different parts together, so a lot of the time it's about getting a sound that complements each other but also will really stand out on its own. I guess just playing it properly is what's required of me sometimes!"

TG: How did you come up with the riff to 'Walk This Way'?

Brad: "That's a riff that just fell out of the sky - all of a sudden there's Joe playing this riff and it was just, 'We've got to finish this! We've got to figure out something!' I think Steven lost his first set of lyrics, he left them in a taxi or something, and he came up with a whole new idea for the lyrics and that was that."
Joe: "That one I kind of planned around the fact that I was always interested in funk, from the really laid back funk of The Meters to the high energy funk of James Brown and everything in between, whether it's Sly or the Funkadelics or whatever, and I was always interested in incorporating it into rock. I can remember thinking, 'Rather than cover someone else's, why don't I write my own?' So whether that came out showing the colours that I intended it to - I don't know if it's true blue funk or what - but in my head that's how it came out that day."

TG: It obviously worked really well later on for hip-hop, too…

Joe: "Yeah well it was 1975 or '76, so I think it was dangerously close to disco! It was kind of a flirtation, that being a hard rocker in those days you didn't mention the words 'disco' and 'good music' in the same sentence!"

TG: Is there a particular way you go about creating a riff?

Joe: "For me, a lot of it is picking up a different guitar, let's say try and play heavy metal on an acoustic guitar, attack things from a totally different way, and that tends to inspire some different sounds or a rhythm. A lot of it comes from the rhythm of things first. If it doesn't make your hips move I haven't got much use for it."

TG: What riffs do you most enjoy playing live?

Joe: "'Back In The Saddle' - I never realised what a good riff that was, or at least how much it satisfied me. And when we play it live it comes across much better than I ever expected it to."
Brad: "I love 'Combination', 'Get The Lead Out', 'Sick As A Dog' - really fun to play and just fun to listen to. I'm always kind of arguing with the band. We were doing some songs yesterday and I was like, 'Why are we playing these songs?' They were songs from the 90s and I'm like, 'Man, I want to do the 70s stuff!'"

What riffs by other guitarists have inspired you?

Brad: "I get inspired by almost anybody - man there's lot of inspiration out there if you wanna find it. I'm just listening to the new Jeff Beck record and that guy just slays me!"
Joe: "Some of the best rock riffs ever written were by Jimmy Page, and I can't really name the songs but some of the stuff he did on his first and second records is beyond brilliant."