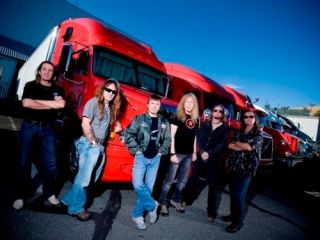 Iron Maiden's first album in four years, 'The Final Frontier' entered the charts at number one this week, so we thought it high time we got a guitarist's perspective on things. We dispatched Joel McIver to find out more.

Iron Maiden - lest we forget, the biggest heavy metal band ever invented, with the arguable exception of Metallica - tend to do things big. Actually, scratch that - they do things huge. Nowhere is this tendency more evident than on their immense new album, 'The Final Frontier', released as you read this and showcasing the jaw-dropping guitar skills of three axe legends: Dave Murray, Janick Gers and Adrian Smith. If it's guitars you want, look no further - as Murray and Gers give TG 10 reasons why you too should step across the frontier...

1. 'The Final Frontier' was recorded by men on a mission

Murray: "We recorded it all in six weeks. In fact, we listened back to some stuff and we didn't remember playing it, because we'd recorded so much! It was great to go back to the Bahamas - the studio was the same as it was 25 years ago."

2. It's vintage Maiden - warts and all

Gers: "There's one song on the album where the timing is slightly lop-sided. It was meandering around the beat, so the producer put it in the correct time - and I really didn't like it, because it sounded clinical. I said, 'Put it back!'"

3. Fans of the 'Maiden gallop' will be in alternate-picking heaven

Murray: "We do a lot of songs with that traditional galloping thing, although there's not as much of it on the new album as there has been on recent albums. We're not purposely getting away from it, though."

Gers: "We were all in the same studio together. Bruce [Dickinson, singer] was in a vocal booth at the end of the room. We had these helicopter headphones made and you couldn't hear anything through them except the mix. That brought a lot of spontaneity to it."

5. …a philosophy that even applies to acoustic guitars

Murray: "There's a nice folkie bit of acoustic playing that Janick did. We've done some acoustic stuff live before, and we might well end up doing it on stage again sometime. Sitting on bar stools? Ha ha! I doubt it!"

Gers: "We put one of the longer songs together section by section, which was interesting. We did it that way because there was no way we could learn and record it all in one day! There were so many melodies there…"

7. Maiden: continuing to put the M in Metal

Murray: "On one song, 'Mother Of Mercy', we all tuned down to drop D - and it really leaped out with three guitars. It was pretty ominous-sounding when we were all playing in that tuning, and really different to what we'd done before."

8. Maiden always strive to be all they can be

Gers: "I'm never happy! I always think I can do a better solo. I tend to do several takes - six, seven or maybe more - so you can listen back and take certain bits. The computers are so precise now."

9. Be prepared for some surprises

Murray: "On 'The Man Who Would Be King', the intro and the vibe came off really good, and the rhythm section in the middle is really weird - and then at the end there's another bit that is pretty dramatic."

Gers: "My Strats might look battered, but my blood and sweat is in them. They have Seymour Duncan Hotrails and the Jeff Beck double-stacked pickups in there. I love the single-coil sound, but they pick up every taxi frequency there is!"