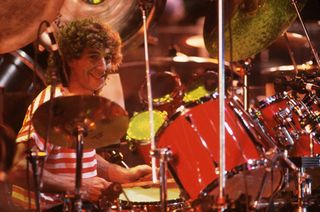 Toto are heading to the UK next month for a rare one-off show.

The legendary rockers will perform at London's Hammersmith Apollo on 26 June for what is billed as their only UK show of the year.

Simon Phillips will be in the drum seat in place of the late Jeff Porcaro and he will be joined by Steve Lukather, Nathan East, Steve Porcaro, David Paich and Joseph Williams.

For more on Toto pick up the new issue of Classic Rock's AOR magazine, which comes with a free cover disc featuring a live recording of the band's track 'Pamela' which has been mixed by Simon Phillips.