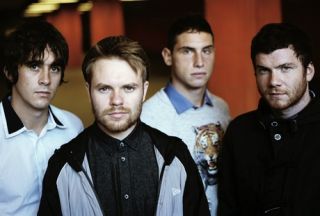 Fresh on the back of releasing a smash-hit album, Enter Shikari hit the road later this month keen to cement their position as the UK's biggest rock band. As they prepare to head out we caught up with drummer Rob Rolfe to talk chart bothering albums, mixing electronic and acoustic and why 4/4 just won't do.

What approach did you take drum-wise with the new album?

"Most of the drums on the album were worked out by programming them in Logic. Rou [Reynolds, vocals] will have a general idea of beats or overall concept of how the song should sound and I'll then work around it or I will just get the electronic and guitar stems then create my own beats that I think suit the song best.

"Quite often the beats will be physically impossible to play live so it's always fun trying to figure them out on my kit. Doing it this way also pushes me and my drumming abilities, constantly having to play new styles, rhythms and techniques instead of the same old 4/4. that's the writing process, obviously in the recording process there are lots of ideas and extra layers of percussion that you'll want to add to beef up the texture that you won't have thought of before. "

How does your playing on A Flash Flood of Colour differ from your past work?

"When out on the road there is very little time to play anything else other than the chosen set. Before writing and recording A Flash Flood of Colour we had a bit of time off in which I bought an electronic drum set and went back to basics, working on my technique and rudimentary skills like rudiments. I worked hard on strengthening my left hand and foot, for example I'd play very simple beats left handed and footed, I was terrible! I felt like a kid again first learning how to play. The more I practiced the stronger I got and I think this really came out in the recording."

Do you have any favourite drum moments/tracks from the record?

"The entire experience was amazing. Roughly 2.45 into 'Gandhi Mate, Gandhi' the beat china originally just laid on the down beat but after listening to it through I jumped back into the live room and stuck in the sneaky off beat on a china/upside down splash combo. It gave such urgency and drive to the section. "

You must be pleased with the reaction the album has had so far, top five in the UK isn't bad!

"Absolutely, it's mad! we can't believe it. Everything from the comments we get from our fans to the reviews to the chart position had been so positive, we never in a million years could have expected this. I think we have the best fans in the world."