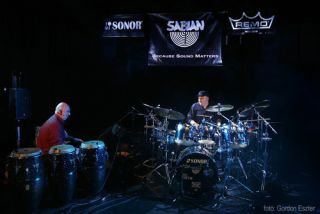 It was a tight squeeze to fit into the room at Tech Music Schools for the masterclass with the tHUNder Duo of drummer Gabor Dornyei and percussionist Kornel Horvath (the HUN denotes their Hungarian origins).

What immediately stood out was just how much the two master performers on stage are able to interact spontaneously. At no point did the show ever descend into mindless chop-busting or simple ear battering. Gabor explored the tonal range of his Sonor Signature Series kit with the aid of brushes, hotrods and mallets as well as conventional sticks, while Kornell had a veritable arsenal of percussive instruments at his disposal, including a Gato drum, congas, bongos down to humble shakers (including one made from goat hooves, which you won't find in your local drum shop) and a triangle.

The music drew upon a global palette for inspiration. They opened with 'Mozambiqudu', which as the name implies involved Gabor playing a Mozambique rhythm on his kit while Kornell played an Udu as they created a dialogue back and forth. 'Tak-Tom' started off with a Bulgarian folk dance rhythm that blended into Indian beats with both men performing Konnakol vocal percussion.

'Hang Samba' and 'Deja Vu' both saw Kornell on dazzling form with a Hang drum from Switzerland, which produces a sound similar to a Jamaican steel drum but is played with the hands. Gabor's independence is remarkable to behold. In 'Hang Samba' he played a drum solo in 4/4 over a 5/16 ostinato on his cowbell with his left foot. 'Cuba Libre' was even more impressive, as he played three distinct patterns simultaneously to layer cross-rhythms over each other.

When the performance was complete, the Duo took questions from the audience and broke down what had just been witnessed. Kornell demonstrated his unique technique for playing at blurry speed with his fingers and explained the nature of his numerous instruments. His approach is highly singular - he plays his Talking Drum held between his knees, rather than under one arm in the traditional manner. At the moment, Kornell is something of a hidden gem in the percussive world here in the UK, but that can't last for long on the sheer strength and inventiveness of his playing.

It was one of those performances that provide a welcome and powerful reminder of just how many musical possibilities can be created by the simple act of hitting a drum.