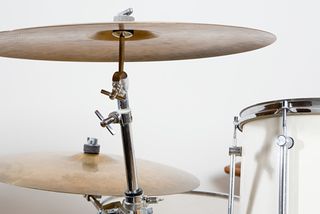 Terrorvision are back! Again! But this time it seems like it's for keeps, as the Bradford Brit rockers are returning with a new set of tunes and a brand new drummer in tow. We checked out their Bristol show over the weekend, and there's certainly life in the old dogs yet.

But before the '90s singalong set, we were treated to The Virgin Marys. Fusing the raw rock of Wolfmother with the indie-edge of The White Stripes, these boys (in particular live wire drummer Danny Dolan) impressed. Dolan's awesome tom work and inventive playing struck a chord not just with us, but with seemingly pretty much every inside the uncomfortably sweat-drenched venue.

The reason the venue was so rammed to capacity was the the return of '90s rock media darlings Terrorvision. Along with the likes of The Wildhearts and Skunk Anansie, Terrorivison formed a major part of the Brit rock movement that swept through the UK in the early to mid '90s. Now, after several take the money and run week-long reunions since their 2001 Demise, the boys are back.

But, they're a man down. Original drummer Shutty is nowhere to be seen, but new boy Cameron Greenwood steps in admirably. Cameron brings new life to old favourites like 'Perseverance', 'My House' and 'Josephine', breathing fresh exuberance into the tracks with his hard-hitting style.

As for the rest of the band, it's business as usual. And business is good. Of course it helps when you've got 20 years of cracking tunes to draw from, while the five new tracks aired point to a bright future ahead for Terrorvision. To paraphrase fellow recent reformees Take That, let's hope they're back for good this time.