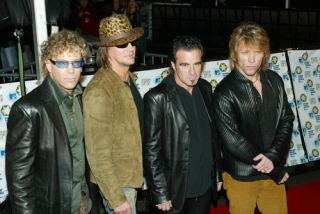 While a full day's entertainment was laid on for the sun-drenched masses at Saturday's Hard Rock Calling - the highlights of which being the soul-tinged rock of Vintage Trouble and Ray Davies' hit-heavy slot - the vast majority are here for one reason only - Bon Jovi.

With the sun still high in the sky Tico Torres and the New Jersey pop rockers exploded onto the stage with the salivating opening ombo of 'Raise Yoru Hands' and 'You Give Love A Bad Name'. From then on it's basically a lvie version of Jovi's mid '90s greatest hits package Cross Roads, with a handful of additions.

'It's My Life', 'Blaze Of Glory', 'Keep The Faith' and more are rapturously received and sound fantastic. Torres especially has a sounds that is unfaltering in its excellence and superbly mixed. Not a bad achievement for a festival show in front of tens of thousands of punters. You get the feeling though that it's business as usual for Bon Jovi - you could see these guys every night for a year and not hear a bum note.

True it's not all singalong, though. The three hour set does feel a little bit of a slog at times, with a mid-show lull sandwiched between the euphoric opening and closing sections.

You'd also be forgiven for thinking that one or two tracks are strung out to help Tico and co make their way through the punishing 180 minutes. The worst offender being a slightly bizarre segue into 'Pretty Woman' during 'Bad Medicine'. Yes, it was as strange as it sounds.

As the band depart after two hours many were expecting an encore of a couple more hits before bed. What we got was another hour of anthems. 'Wanted Dead Or Alive', 'Someday I'll Be Saturday Night', 'Livin' On A Prayer', 'Always', the hits just keep on coming.

Three hours, 27 songs, 50,000 very happy festival goers. All that was missing was a Tico solo.