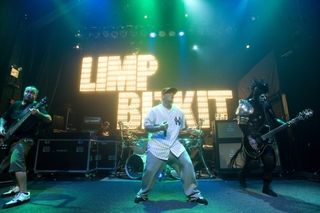 Limp Bizkit were forced to pull last night's show in Norway after John Otto was hospitalised. According to reports, the drummer has been struck down with pneumonia.

The band's manager told TMZ.com that the Bizkit man is now undergoing tests to find out how serious the illness is. The nu metal kings have upcoming shows across Europe and South America on the way, with no official word just yet on whether these will also be shelved.